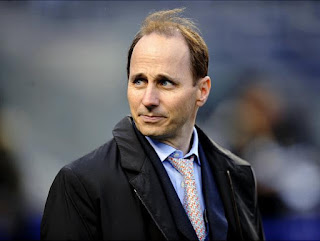 With all the Yankees have had to deal with in the media from the end of last postseason to the offseason through the start of this regular season, I never would have pegged him as the type to stir the pot more.  The players have all handled this season well, Joe has done a great job working his team and the beat reporters, and Hal has managed to keep his mouth shut more than he did during the offseason.  And then here's Cash, tossing multiple people under the bus for the Youkilis screw-up (which may have turned out to be somewhat justified based on the shaky record of the team training staff this season), throwing fuel on the ever-burning A-Rod fire, and burying his hitting coach for speaking his mind.  What's the deal, guy?

Is Cash trying to lay the groundwork for not getting re-signed when his contract is up?  That will be after the 2014 season, when the $189 million budget is supposed to be put into play.  Based on how this offseason went, that's going to make fielding a championship-caliber team an even greater challenge next season.  If Cash was frustrated by having his hands tied this past offseason, how's he going to feel next one when he's got even less to work with and will eventually be painted as the scapegoat by some if the Yankees fail to make the playoffs?  Does he want to deal with that?  Or would he rather get out when he can and go find a new job where he can get back to generally managing?

To be fair to Cash, I do find it a bit odd that Long would say what he said to the media if what Cash said about it never being mentioned behind closed doors is true.  Throwing up a potential injury red flag after the fact smells a lot like playing the CYA game, so maybe K-Long is feeling the heat with the recent punchless offensive performance and the downward path a lot of his lefty hitters seem to be on.

So what's really going on in the clubhouse and the offices at Yankee Stadium?  Are the coaches and GM feeling the heat for the team's struggles more than the players?  With the way Hal has thrown around the "you should be able to field a great team with $189 million" line to justify his budget plan, I can't say I'd blame them if they are.  I'm not trying to go too Olive Stone conspiracy theorist or Wally Matthews pageview troll with this; it's just a trend I've noticed with Cash this year.  And honestly, it's a lot more interesting to write about than "Player X is slumping, Player Y is slumping, Player Z is slumping, Phil Hughes sucks."  Let's see how Cash handles the next big injury situation with the media and then we might be onto something.
Posted by Unknown at 3:30 PM