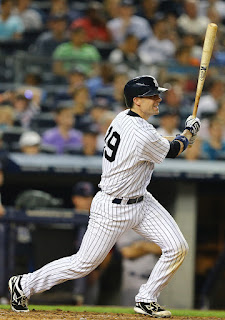 Concussions are a hot button issue in sports right now, so Stewart being diagnosed with one today would not look good for the Yankee trainers and medical personnel. And as I said, this is not the first time we’ve seen something similar happen with other players and their injuries. Eduardo Nunez has been out of the lineup for almost a month now after leaving a game with what was originally called a strained ribcage. It was described as something minor by the team, yet here we are in early June, 3 replacement shortstops later, without Nunez on the field and with him reportedly nowhere near returning to full baseball activities. There hasn’t been much more information on his condition or the actual nature of his injury, so it makes me wonder what it really was, why the team hasn’t said much about it, and whether it was missed upfront before Nunez was allowed to start rehabbing?

There’s also the now well-publicized botch of Kevin Youkilis’ back injury, something Cash clearly wasn’t happy about and something that probably cost Youkilis a few weeks of playing time now that he just finally made his way back to the lineup on Friday. The report card for Steve Donohue and company would not be one of straight A’s right now and it makes me nervous to think about what kind of setbacks could be around the corner for guys like Mark Teixeira and Andy Pettitte. They’re already relatively injury-plagued guys and that’s before they/we had to worry about whether they’re being diagnosed and treated the right way. I’m not in the medical field and I don’t pretend to be.

I’m admittedly the last person on earth who should be questioning the job done by people with actual medical degrees, but I’d be lying if I said I wasn’t concerned right now. Professional athletes don’t have to miss 2 straight games because of dehydration. Last night was clear proof that there was something more going on with Chris Stewart and it’s not the first time something hasn’t added up when it comes to injuries this season. The Yankees are already beat up enough this year, and their core is going to be for years to come. The team training staff doesn’t need to be making it worse.
Posted by Unknown at 11:03 AM