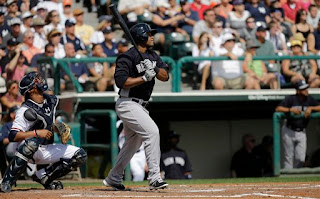 
Warren has been a big part of the great job done by the rookie pitchers this season.  He, Preston Claiborne, and Vidal Nuno have combined to allow just 19 ER in 76.2 IP (2.23 ERA) after all getting their chance to make an impact because of injuries to the pitching staff.  As they've performed well they've seen their roles on the team change.  Warren is now the official long man out of the bullpen, Claiborne has worked his way into the mix for the 7th Inning Guy role ahead of D-Rob, and Nuno had probably bypassed Ivan Nova as the 6th starter before he hit the Triple-A DL.  For 3 guys who weren't expected to provide much, if anything, to the Major League squad this year, it's been a job very well done by all.

The same can't be said for the position player rookies who've gotten their chance this year.  David Adams has almost disappeared from thought as a part of the offense after a hot first week replacing Kevin Youkilis.  He's getting more PT again with Youkilis out but his season batting line sits at just .213/.234/.333 (.248 wOBA).  Were it not for his positive defensive rating he'd likely be another negative WAR player.

Austin Romine has been a negative WAR player since being called up to replace Frankie Cervelli.  -0.5 WAR to be exact, according to FanGraphs.  He's hit even worse than Adams, with a frightening .132/.148/.170 triple slash to his credit.  Like Adams, he's had a healthy K rate (26.8%) and like Adams, he's yet to draw a walk in his Major League career.  133 combined plate appearances from these 2 and not a single base on balls.  That's pretty bad.

Which brings us back to Zoilo.  He's having a solid year in Triple-A (.297/.369/.421 in 293 PA) and appears to have finally made the necessary adjustment to his approach to create a slightly higher ceiling for himself at the next level.  Almonte's current BB (10.2%) and K (16.0%) rates are much improved from where they were in Double-A in 2011 and 2012, and both those trends and his switch hitterness make him a more attractive option than the rest of what's on the current Yankee bench.  But will that translate over to the Majors?

Almonte's always struck out a lot more the first time jumping to a new level, almost as if his aggressive swinging tendencies come to the surface.  That kind of approach will get you exposed and picked apart quickly by Major League pitching.  He also has a very hefty platoon split for a switch hitter.  Almonte tunes up RHP (.303/.377/.451 in Triple-A this season) but has very little pop against lefties (.281/.342/.328).  It will be imperative for him to maintain the patience and improved selectivity he's shown in Triple-A this season at this level, especially against righties.  If Zoilo gets out of sorts with his swing or approach here, he isn't going to have borderline Quad-A guys grooving pitches to bail him out.  He's going to have Justin Verlander, Yu Darvish, and Felix Hernandez throwing him more nastiness than he's ever been able to comprehend and making him look silly on strikeouts.

The bar has been set pretty low for Zoilo, both by the rookies that have already been called up before him and the current crop of below-replacement level veterans giving away outs at the bottom of the batting order.  That being said, it's not a slam dunk that Almonte is going to outperform them.  His history suggests he could be in for a rough go his first time experiencing this level and unlike Adams and Romine, he doesn't offer much value by way of defense.  Joe's going to have to be strategic with his use of Zoilo and put him in situations where he can be comfortable and successful, and then who knows?  Maybe he surprises us.
Posted by Unknown at 11:00 AM