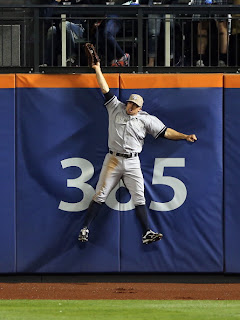 - Gardner: 1-4, 1 3B, 1 R, 1 K, 2 LOB.  Gardner's triple in the 6th was more bad defense than anything, but there's no denying his leaping catch at the wall in the bottom half of the inning was a spectacular play.  It robbed a 2-run HR and kept Phil scoreless at the time.  Fantastic play.

- Cano: 1-4, 1 K, 1 GIDP, 2 LOB.  Another blah night at the dish for Cano.  His GIDP in the 6th was the worst thing that could have happened in that situation.  Took a potentially big inning against a crumbling Niese and pulled the E-brake on it.  Not what you expect from your best hitter.

Game 2 of the series tonight and it should be a dandy.  Hiroki Kuroda and Matt Harvey square off in a battle of the aces.  Don't be surprised to see another no-hitter in play from Harvey if the lineup doesn't shake out the cobwebs.
Posted by Unknown at 7:46 AM