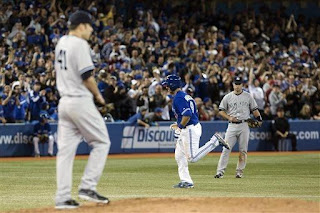 - Stewart: 2-3, 1 HR, 2 R, 1 RBI, 1  LOB.  Just when it looks like Cervelli is getting a stranglehold on the starting catching job, TCS comes out and has a big game like this.  Hey, if each of these guys are feeling the pressure to perform, I'm cool with it.  Whatever it takes to get production from the position.

- Logan & Phelps: Combined 3+ IP, 4 H, 4 ER, 2 BB, 3 K.  Hard to say that either of these guys "relieved" Nova in the 6th inning.  Logan continues to be spotty in his ability to get lefties out, and Phelps was bad for the second straight outing.  They had a lead, they gave it back, and they gave it back quickly.

The Yanks keep it in the division when they travel to Tampa to start a 3-game series against the Rays on Monday night.  A big-time lefty pitching matchup is set with CC Sabathia and Matt Moore squaring off.
Posted by Unknown at 7:28 AM