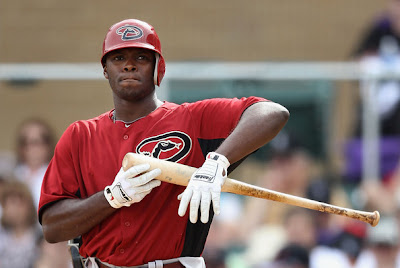 "Arizona very much open again to talking about trading Justin Upton w/other teams, and not surprisingly, their specific demands have changed."

That's Olney's tweet if you were too lazy to click the link, and the most enticing part is that last bit about Arizona's demands changing.  They already have a pretty well-stocked outfield and just signed Cody Ross to a multi-year deal a few weeks ago, which can only lead me to believe that those changing demands are a lower prospect asking price.  Upton is going to fetch a haul one way or another, and Arizona shouldn't move him unless they get one back.  But if they are backing down on their asking price, that works in the Yankees' favor and should be the final sign to the front office that they need to pick up the phone.

Building a package around Curtis Granderson, someone from the Hughes/Nova/Phelps trio, and a couple of top prospects was already a good option for the Yankees.  The possibility of being able to scale the package back from there and still land exactly the type of player they need would be even better.  Upton's AAV wouldn't be a big hindrance to the 2014 payroll goals, would actually help lower payroll for 2013, and the Yankees would already have their 2014 outfield of Gardner/Upton/Ichiro set so they could focus their efforts elsewhere next offseason.

I know realistically there's probably no chance the Yankees get seriously involved, and maybe this is all being overblown, but the signs point to Arizona taking a much more active approach to moving Upton than just the toe-in-the-water efforts they made earlier in the offseason.  Upton and the Yankees are a great match, that's not going to change.  The smart move baseball-wise, regardless of the money, would be to make a play for him now while his price tag is going down.
Posted by Unknown at 12:36 PM