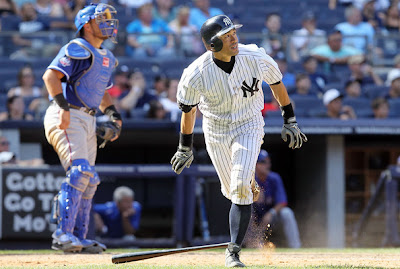 I'm not going to be happy if/when this deal becomes official, and everybody knows my reasons.  But there's been a lot of support for Ichiro in both the comments section of this blog and on the AB4AR Facebook Page anytime I bring him up in a negative context.  So in an attempt to shelf the negativity until the deal gets done, and to appease the AB4AR masses who are so pro-Ichiro, here are some positive things I can say about him and what he'll be able to offer the Yankees should they re-sign him this week.

- He could combine with C-Grand in left and Gardner in center, if the Yanks are smart enough to make that move, to give the team a very good defensive outfield capable of covering a lot of ground (always helpful when Hughes & Nova are in the rotation)

- Whatever power he does have left will play up hitting in YS3, as it always has with Ichiro

- If, that's IF, he manages to repeat his 2012 Yankee performance over a full season, that production will be great value for what the Yankees will likely pay to sign him

- He's only coming on a 1-year deal, so no negative impact on the 2014 payroll plans

There. That's enough positivity, right?  Enough to buy me a little equity with all you Ichiro fans until the signing becomes official and I absolutely blast it?  Bare minimum I think you have to applaud the gesture on my part.  It's not that I think Ichiro is completely useless, certainly not.  He's proven that there's still a little gas in the tank.  I just hope it's enough to get him to the finish line if the Yankees do sign him.
Posted by Unknown at 12:32 PM