The Old Get Older 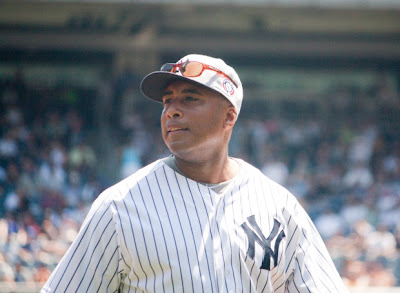 (Why not bring Bernie back while you're at it?  Courtesy of Mike McCann/WFAN)﻿

I know we're still weeks away from the offseason really heating up and it's way too early to state this as a definitive conclusion, but I can't help but feel like the Yankees are just going to bring back as many of last season's older players as possible on 1-year deals to control costs.  Rather than try and get creative or work the phones and the trade market to get younger, better, and payroll-friendly, they're going to take the easy way out, just re-up with the same old crew, and hope for the best.

After being connected to Torii Hunter right off the bat when free agency started, the Yankees announced that they weren't interested in signing him to anything more than a 1-year almost as soon as the reports of them talking to his agent came out.  Now Hunter did carry some risk going into next season, and 2 years and $26 million would have been a deal that I would have said no to if I were the Yankees as well, but consider the backup options they've been pursuing and tell me that doesn't concern you.

After letting the younger (32 at the start of next season), better, switch-hitting Nick Swisher walk with just a qualifying offer, the Yanks have been engaged in the always-productive "preliminary talks" with Raul Ibanez (40) and Ichiro Suzuki (39), 2 left-handed hitters with major platoon splits who are not everyday players anymore.  If they haven't placed the call yet, I imagine there's going to be one to Eric Chavez (35) soon about reprising his bench role, and look who they're going after to address the holes in their pitching staff: Hiroki Kuroda (38), Andy Pettitte (40), and Mariano Rivera (43).

Now this wouldn't be the worst roster-building strategy if the Yankees were a younger team who just needed a few veterans to bring some experience and leadership to the bunch.  But they're the oldest team in baseball, by far, and the bulk of their money is already tied up in an aging core.  They're also trying to shed payroll, which, as the Marlins have taught us time and time again, you normally do by getting YOUNGER.  Not the Yankees.  The approach they're taking right now will have them increasing their average age while they try to cut costs.  When that expensive, aging core group of players includes 2 corner infielders who are slowly regressing to league average, a shortstop with limited range who's coming off ankle surgery, and an ace of your staff who may start to have his workload restricted, the likelihood of that approach resulting in a championship-caliber team is decidedly lessened.

This is not to say that I think what the Yankees are doing is completely wrong.  I still believe there is value in getting below the luxury tax threshold, especially if the after-effect is another boost in spending to replenish the team in the years following.  But if the Steinbrenners are going to take this lazy approach to getting it done- signing all the old players to 1-year deals so you can just hack that chunk of money off the payroll at the end of the year- I hope they don't expect us to believe they are serious about winning a World Series next year.  Making an already old team older while spending less to fortify that group with younger support players is not a strategy that jibes with that goal, and if it's the strategy they're going to follow I hope they at least don't try to insult my intelligence by telling me in March that they "expect" the team to contend again.
Posted by Unknown at 8:05 AM