"Look, I know how incredibly shitty this contract is, and I know no GM in his right mind would be willing to take it on unless we were picking up the bulk of it and he didn't have to give up anything valuable in return.  Why would I waste my time, and the time of my fellow GMs trying to trade somebody this untradeable?

Having said that, fellas, I know some of you have had dreams in the past where you had the opportunity to add Alex Rodriguez to your team.  If any of you out there, ANY of you, still have any of those thoughts kicking around the old melon from time to time, give me a call.  We'll talk."

Not exactly as mysteriously ninjariffic as his talks last offseason, but still enough to not ruffle any feathers.  I guess in this situation that's as good a job as any.  Everybody knows The Horse is an anchor on the payroll and the roster right now, and there's probably some regret finally starting to seep into the minds of the Steinbrenners for signing him to this contract.  He would be that same anchor on any other team's roster, so Cash knows it's not worth spending a lot of time trying to move him, especially when he still does have some value.

Expect this to be how it goes all offseason with Rodriguez and Cash.  Rumor will pop up about some team, Cash will deny, say the team's plan is to move forward with A-Rod at third, the end, repeat when next rumor comes up.  Once he finds his center, maybe Ninja Cash can use this as a distraction to keep the MSM off his tail while he sets up another deal. 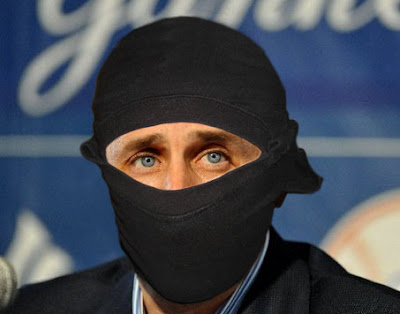 "Bubba Crosby will be our opening day center fielder."
that's my favorite cashman quote ever. we all knew it was BS, and then boom: johnny damon. i do remember Cashman saying he didn't want to resign A-Rod after he opted out, and A-Rod went right to George... isn't that how this mess was created? but i guess it's a question of dollars and SENSE at this point.