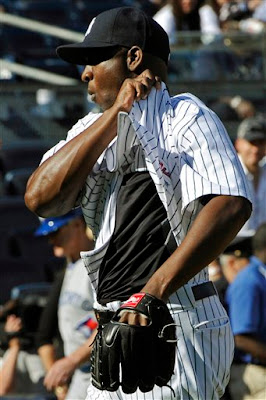 
What We Thought We Knew- The Late Innings Were Locked Down

Rafael Soriano was healthy again and coming off a strong finish to the 2011 season.  David Robertson had one of the most unhittable curveballs in baseball, and racked up strikeouts at a pace only Craig Kimbrel could beat.  And Mariano Rivera was simply still the best in the business at closing out games, mowing dudes  down and sawing them off with that magical cutter.  In these 3, the Yankees had arguably the best late-inning trio in all of MLB, and would have the double-sided benefit of being able to shorten games on days where all 3 were available and having multiple closing options for days when one or 2 of them weren't.

As much unnecessary money as it cost them, and as against the move as Cash was in the 2011 offseason, signing Soriano turned out to be a blessing in disguise this year.  D-Rob dealt with some injury problems through most of Spring Training and the early part of the regular season, moving Soriano into the primary setup role behind Mo.  And when the unthinkable happened in Kansas City, and Mo went down for the year with his knee injury, Soriano stepped up and assumed the closer role and did an outstanding job.  Robertson righted the ship after his injuries and was lockdown in front of Soriano as the setup man, but to lose Rivera and not miss a beat in terms of bullpen efficiency was a great accomplishment for this team this year and the lion's share of the credit for that goes to Soriano and his 42 saves.

What We Thought We Knew- High Turnover Was On The Horizon

It's as a sure a thing as their is in baseball, an inevitable part of a season that can sometimes be the difference between making the postseason and not.  Relief pitchers, especially back end ones, are going to struggle, get hurt, completely fall apart, whatever, and spots are going to need to be filled.  The Yankees experience it like any other team, and they came into the 2012 season with one of last year's mid-season finds, Cory Wade, as a part of the season-opening crew.  He wasn't guaranteed to stick all season long, nor were the lefties in the 'pen.  With some guys getting the call early because of the injuries to Mo and D-Rob, and some guys surely primed to get the axe late when Joba Chamberlain and David Aardsma returned, the bullpen merry-go-round was going to be spinning all season long.

Despite having a group of capable arms stashed in Triple-A from last year, it was once again Cash's ability to find useful arms through free agency that had the greatest impact on the bullpen's overall success.  David Phelps ended up being the only real internal player who made an impact, and it was a very positive one as the 'pen's unofficial "do all" guy.  After him, it was a couple of unheralded FA signings, Clay Rapada and Cody Eppley, who had the biggest impact.  I honestly didn't know that either of these guys existed, but the Yankees found them and they performed their duties well as a 2nd LOOGY and 1st real righty specialist the Yankees have had in a while.  Throw in Derek Lowe and some key innings from him late in the season, and it was another successful year filling bullpen needs off the scrap heap.

What We Thought We Knew- Mo Was Getting Closer to Retirement

For all the joking about Mo being inhuman and playing forever, the reality of the end of his career coming up started to hit home last season and it was an even bigger reality heading into this season.  I flat out called it one of the things the team was already planning for in the "Knowns/Unknown" preview post in March.  The Yankees knew Mo wasn't going to pitch forever, they knew that a strong bullpen is always one of this team's calling cards, and in order to continue that tradition without Mo, they had to start building a future staff of reinforcements now.  This season was going to be the final one of his current contract, and it wouldn't have been a shock, win or lose, if Mo decided to hang them up after 2012.

What was shocking was the way Mo's 2012 ended.  After years of doing it, and thousands of flyballs caught, Mo blow out his knee shagging flies in early May in Kansas City, setting in motion all the other events that are referenced in the paragraphs above, prematurely ending his 2012 season, and possibly also prematurely ending his career.  Mo was adamant about coming back in 2013 right after the injury, surely not wanting his legacy to end on terms that were not his own, and the reports on his recovery have been positive across the board since he had surgery.  But with a report coming out this week that he may be reconsidering, even if it's a report we've heard before, the knee injury could end up being the final chapter in Mo's great career.
Posted by Unknown at 11:07 AM