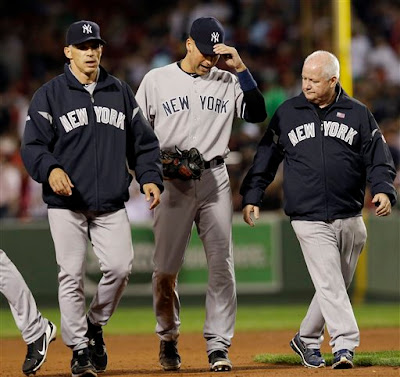 - In typical Jeter fashion he brushed it off as nothing, and Rafael Soriano did the same thing after giving up a solo homer in the 9th that made it a 1-run game.  He held on for the save and the Yankees held onto their tie for first in the division.

- Phelps: 5.2 IP, 5 H, 1 ER, 1 BB, 5 K, W.  Strong night for Phelps, a big improvement over his last outing.  It all works off the fastball for Phelps, and he located it much better on the inside corner last night, especially to lefties.  Phelps recorded all 17 of his outs either on the infield or in the catcher's mitt, and if this was his last start of the season it was a good one to go out on.

These teams will finish up this series tonight against 2 pitchers that they're very familiar with.  Phil Hughes toes the rubber for the Yanks and Felix Doubront for the Sawx.  Don't be surprised to see Jeter back at the top of lineup card.
Posted by Unknown at 7:24 AM