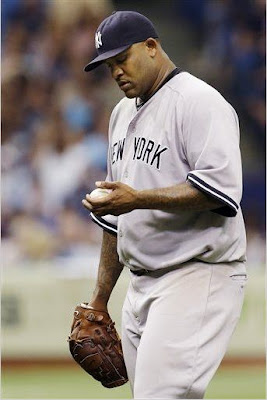 - Joe played the bench game brilliantly in the 9th, pinch running Eduardo Nunez and getting a steal and pinch hitting Curtis Granderson for Martin against Rodney, but Granderson struck out and the division lead was down to 1.

- Martin: 2-3, 1 RBI, 1 SB, 2 LOB.  Was the only player with a multi-hit day at the plate, and was a factor on the basepaths both offensively and defensively.  Unfortunately for him, he's been such a liability with the bat this year that hitting C-Grand for him actually made sense.

- Ichiro Suzuki: 0-3, 2 K, 4 LOB.  Been quietly doing a whole lot of nothing lately.  Hasn't scored or driven in a run, or had more than 1 hit in a game since 8/26.  When you don't draw any walks, that pretty much makes you worthless in the lineup and that's what Ichiro is right now.

- CC: 7 IP, 8 H, 3 ER, 2 BB, 4 K.  I want to give Carsten some credit somewhere, but I just can't in a game where he allows 10 total baserunners, only throws 8 swinging strikes, gets more outs in the air than on the ground, and coughs up the one lead his lineup gave him.  The HR has been a problem for CC all year long, just like everybody else in the Yankee rotation.  There comes a point where more "good rather than great" starts from your ace in big situations becomes an issue.  We're getting to that point with CC.

Freddy Garcia will try to be the stopper tonight and keep the division lead solely in the possession of the Yankees.  He'll square off against Alex Cobb from Tampa as well as his own lineup, which has really been a letdown and wasn't much help to CC yesterday.
Posted by Unknown at 7:08 AM