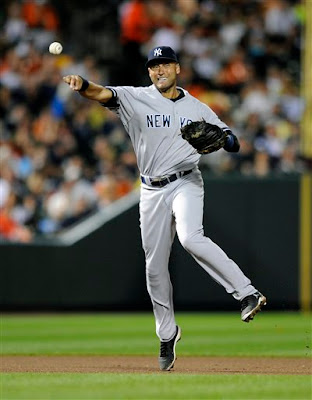 At this point it's getting hard to find a positive adjective that hasn't already been used to describe Derek Jeter's 2012 season.  What he's done this year has been simply remarkable, and almost unthinkably good given how bad he looked this time 2 years ago.  While the rest of the team's veteran hitters around him have regressed, and guys still in their primes did the same, Jeter has been very consistent and very productive at an age when he rightfully shouldn't be, and has flat out carried the offense for stretches.  With the regular season winding down, Jeter in the context of the AL MVP race has become an increasingly popular topic of conversation.  I'm positive he won't win the award, and he shouldn't, but it's definitely worth wondering and asking where Jeter will wind up in the final voting.

Notice I used the word "will" there, not "should."  "Will" is the key to this discussion, because trying to make an MVP case for Jeter on the argument of "should" would be pointless.  Mike Trout is having a season that calls back to the days of baseball's all-time greats and is easily the most deserving candidate, Josh Hamilton and Miguel Cabrera are putting up the elite-level offensive numbers that voters drool over and aren't quite the defensive liabilities that Jeter is, and guys like Adrian Beltre, Robinson Cano, Austin Jackson, Justin Verlander, and Felix Hernandez are having all-around seasons that are head and shoulders above Jeter's.

Jeter leads AL shortstops in wOBA (.353), but that's not exactly a group of thumpers, and Jeter's poor defensive numbers put him behind Elvis Andrus in total fWAR for the position.  All Jeter has to go on is his offensive output, and as good as its been it hasn't been otherworldly.  He's going to get his 200 hits and 100 runs scored, but a .353 wOBA and an .810 OPS are still far cries from Jeter's production in his prime years and even then those numbers weren't enough to get him the award.  If you were filling out your MVP ballot based solely on the numbers, standard and sabermetric, Jeter would be a stretch to make the bottom half of the top 10.

But as we know, baseball writers and voters are woefully behind the times when it comes to advanced statistics and accurately measuring a player's value.  That fact is what's going to get Cabrera and Hamilton plenty of votes based on their shiny HR and RBI totals, and it's also what is going to make Jeter's case so interesting.  Jeter has always been a media and fan favorite, and no matter how much you may roll your eyes at that there's no denying that Jeter's high standing in the media community is going to have a positive impact on where voters place him on their ballots.  He's the most visible, well-liked player on the potential AL East champion who had a plus offensive year at a premium position, played through injuries again while the rest of the big names on his team dropped like flies, displayed all the intangibles and grit that voters love about him, and did all of that at an age where most guys are retired.  If you can't smell that spin coming, you need to have your olfactory nerve checked.

The age factor might be the biggest thing working to Jeter's advantage.  To have the kind of season he's had at age 38 hasn't just been good or really good, it's been HISTORICALLY good.  Jeter's sitting at 199 hits right now.  He passed Honus Wagner weeks ago for the all-time single-season hits record for a 38-year-old shortstop, and he's only 10 away from passing Pete Rose for the all-time single-season hits record for any 38-year-old player period.  When you've done something that only 4 players in the last 68 years have done, and your production is being lumped in with the likes of Wagner and Rose as it relates to all-time baseball records, that's something special.  And with all the "can Jeter catch Rose's hits record" talk that's gone around the MSM this year, bypassing a Rose hits-related record is only going to fan the Jeter-loving flames when it comes time to vote.

The fairness of the MVP voting process and the factors used by voters to make their decision can be debated until the end of time.  What cannot be debated is that there are always a multitude of intangible and non-statistical factors that influence those decisions, and Derek Jeter thrives on those factors.  He's got announcers that still gush over his hustle down the first base line and kids who weren't even born when he started playing who call him their favorite baseball player.  He's an MLB institution, and all things considered he's having one of his best seasons at age 38.  That age factor, and the all-time historical platform its put him on this season, will likely weight heavily on the minds of the MVP voters, especially if Jeter finishes up these final 16 games well and ends up in the 210-215 hit range.  It wouldn't surprise me at all to see Jeter wind up 4th or 5th in the final tally.
Posted by Unknown at 2:05 PM