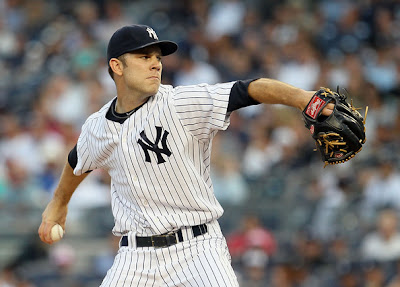 I've written about David Phelps a pretty fair amount this season.  I can't help it, I think he's an underrated pitcher and I'm fascinated by the way his season has gone down.  Phelps' 2012 campaign has been a continued series of fortunate opportunities created by unexpected circumstances affecting the rest of the pitching staff.  He got a 25-man roster spot out of Spring Training because of Michael Pineda's shoulder injury; he got a lot of early chances to show what he could do thanks to some horrific early outings by Ivan Nova and Phil Hughes; he got the chance to start because of Freddy Garcia's unfathomably bad start to the season and the Yankees not being able to wait for Andy Pettitte any longer; he's slowly worked his way up the leverage ladder out of the bullpen as other middle relievers have regressed.  Now he's got another chance to shine in a starting role because CC landed back on the DL.  It's been at the expense of others' misfortune, but Phelps himself has had some pretty good situational luck this year.

And he's made the most of that luck by pitching pretty damn well all season.  He had a rough stretch from late April to early May, but since then he's been very good in any role the Yankees have asked him to take on.  After his solid 5-inning start against Texas on Monday, Phelps is rocking a 2.53/3.89/3.76 slash line for the year with a 9.32 K/9 rate in 57 innings pitched.  He's been at his best since coming back from his June MiL trip, allowing just 3 ER in 20.0 IP with a 25/6 K/BB ratio in the last 6 weeks, and has already shown an ability to think on the mound, learn from his mistakes, and adapt and make in-game adjustments depending on what hitters are trying to do against him.

With his Major League exposure this season and the almost complete disaster in the Triple-A rotation beneath him, Phelps has become the "next" homegrown Yankee pitching prospect.  Given their recent poor history in that department and their future plans to cut payroll, that's important for the Yankees and for Phelps.  But how legitimate a prospect can we call Phelps based on just 57 Major League innings?  I believe in him, but that belief is not universal across the Yankee fanbase or the blogosphere.  Without trying to make a 57-inning sample size definitive, here's some food for thought on Phelps' early Yankee career and how it stacks up against the most recent group of homegrown starting pitching prospects and their first 57 career IP:

Those numbers don't just stand up to the competition, they stand well above almost all of it.  Joba's production came almost exclusively during his electric first run as a reliever, and with Nova, Hughes, and IPK accumulating their numbers almost exclusively as starters getting thrown into the mix, the argument can be made that as young pitchers put into high-pressure situations their early results are understandable.  But can't that same argument also be made for Phelps in relation to what he's been asked to handle this season?  Remember that we're talking about a pitcher who's had his role change 6 times in the season's first 4 months, with the 7th change coming in this latest move back to CC's rotation spot.  Joba and Hughes struggled with the flip-flopping from starter to reliever, granted with some injuries sprinkled in.  Phelps has gotten better as the season has progressed, even with the constant role changing, and has done it in a season where he wasn't even supposed to open with the team out of camp.  That has to say something about the kid.

While we're on the topic of Phelps' immeasurables, there's also something about the way he works and carries himself on the mound that I like.  Phelps barely shows any visible emotion on the mound, but he has a look of quiet focus and intensity on his face that actually reminds me of Pettitte**.  He never looks rattled or even remotely bothered by anything that's happening on the field.  He's also got some hair on his peaches and isn't one to shy away from the moment.  Not every pitcher can be confident enough to throw a 4-seamer on the inside corner to Miguel Cabrera on a 3-1 pitch and hit his spot to get Cabrera to fly out, or completely fool Elvis Andrus with a lightning quick move to pick him off of 2nd base.  Phelps did both in the span of 5 days.  There' no stat to measure a pitcher's swagger, but Phelps has shown that he's got some on multiple occasions, which is very encouraging to see from a rookie pitcher.

All of this adds up to place Phelps is in a very opportunistic position right now where he can start to carve out a better-defined and more important role on the Yankee staff.  Nova and Hughes' performances have been uneven lately, and both are likely to be at least included in discussions with the D-backs in the offseason if the Yanks are serious about acquiring Justin Upton.  Andy almost assuredly is not coming back after this year, and Hiroki Kuroda could very well earn himself some lucrative contract offers from teams who skipped on him this year with the job he's doing.  The Yankees might need a cheap rotation option for next season, and they'll certainly need another one for 2014.  With what he's already done this season and another strong outing in his next start before giving way to CC again, Phelps could force his way into an open spot.

It's highly unlikely that he ends up becoming an All Star starting pitcher down the road, and 2 more spot starts should not get his name written into future rotations in permanent ink.  But it's hard to say that David Phelps' 2012 season has been anything but a tremendous success, and I think it's fair to say his ceiling has been raised.  He's managed to not only survive, but thrive in the Yankees' up-and-down, here-and-there, starter-reliever mismanagement system of young pitchers, and shown enough stuff, pitching tools, and intestinal fortitude to be considered a serious option for future Yankee rotations.  He's seized every chance he's gotten so far this year and made the most of them.  Now he's got another chance to show the Yankee brass that he deserves their attention.
Posted by Unknown at 3:23 PM