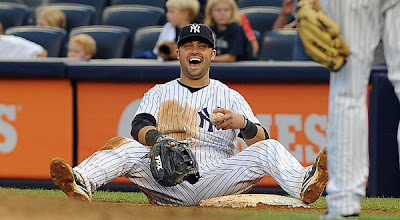 The lineup was already a bit short without Nick Swisher this week, and it got even shorter with Tuesday's injury to Alex Rodriguez.  The Yankees managed to get by on Wednesday thanks to Jayson Nix's big 8th-inning double, but the team has a glaring lack of right-handed power right now with by Swish and The Horse riding the pine.  Swisher took some BP earlier in the week and all signs point to him making a return to the lineup this weekend against Bahhston, likely Saturday.  A-Rod, of course, is going to be out much longer than that, which still leaves the Yankees with just Swisher, Teix, and Andruw Jones as the only real sources of righty power in the lineup.  With a shortened lineup and a lack of right-handed pop, now would be an appropriate time for Joe to do some lineup juggling and match up even more against RHP/LHP.  If I were calling the shots, here's how I'd do it.

A couple of thoughts:

- Ichiro obviously isn't the ideal leadoff option that he used to be, but I liked Joe using him and Jeter 1-2 on Wednesday and I think Ichiro's speed and contact skills at the top of the order could help maximize his value with the guys hitting behind him, and it helps keep the lineup deeper at the bottom.

- I know he hasn't fared as well as LHP as in years past, but I don't see any reason why Robinson Cano should not be hitting third all day every day.  He's too good a hitter to not be there and you can play a lot of hit-and-run with him with Ichiro and Jeter on base.

- With A-Rod out, I like Curtis in the 5-spot to add some thump to the middle of the lineup.  I've thought he and A-Rod should be switched in the batting order for a while now, and with C-Grand hitting a few homers recently and re-igniting his power stroke, I want him down in the order hitting with more RBI opportunities.

- Against lefties, I would put Swish in the 2-hole behind Jeter and bump Ichiro back down.  Ichiro doesn't hit lefties that well anymore, getting 3 righties in the first 4 batters gives the Yankees a strategic advantage, and I believe hitting in the second spot in the lineup can help bring back some of Swish's count-working/walk-taking skills that he's been lacking this year.

We'll see what Joe does over the course of this weekend's series once Swish is back on the field, and that should give us a good idea of how the batting order is going to look sans A-Rod moving forward.  He hasn't been shy about tinkering with it and playing to L/R matchups all season; I don't see why he would stop now.
Posted by Unknown at 7:10 AM