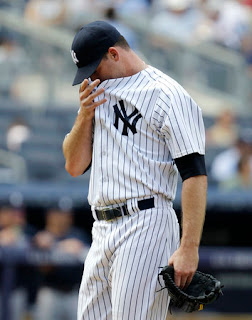 
Through the Yankees' 85 games, Logan has appeared in 43 of them and pitched 31.0 innings.  That's an 82-appearance, 59-inning pace per 162 games, both of which would be new career highs for Logan.  In his first 2 seasons in New York combined, Logan made 115 appearances and pitched 81.2 innings, so he's definitely entering foreign workload territory here.  In a way, Logan has nobody to blame but himself for this situation, as his improvement of his fastball command, development of his slider into a dominant swing-and-miss out pitch, and increased effectiveness against right-handed hitting all helped to move him up in Girardi's pecking order.  And even though 59 IP might not seem like a lot, for a guy who's traditionally been just a LOOGY that can be a pretty hefty spike.

The monthly split sample sizes are all quite small, and the one for July is even smaller, but there are some trends in Logan's stats worth noticing.  His FIP, K/9, HR/9 numbers have all gone in the wrong directions since May, as have his GB and FB rates.  He's still striking plenty of batters outs, but Logan is getting burned with increasing regularity on balls in plays.  The shift in rates suggests that he's having difficulty locating both his fastball and his slider down in the strike zone, something that typically happens when a pitcher becomes fatigued.

Logan has been used 4 times in a 5-day span twice in the past month dating back to June 9th, and those 2 occasions fell between 6/9 and 6/20.  It was that outing on the 20th when Logan gave up his 2nd HR of the season, and the first of 3 out of his season total 4 he's allowed in the past 3 weeks.  Add to that his current 16.88/13.19/6.17 tripleslash in his 2.2 innings of work in July and it's clear that the All Star break came at the perfect time for him.  He's going through his biggest rough patch of the season this month, and given how much he's worked it's certainly understandable.

Coming out of the ASB, Joe should think twice about running Logan out there so often.  Yes, he's been effective against righties, and no, Joe doesn't have Cory Wade around right now to sop up more of those ABs against righties, but it's more important to keep Logan fresh and sharp for the high-leverage late-season and postseason ABs against opposing teams' lefties.  Take the kid gloves off of D-Rob and work him, give Eppley some more innings, Phelps if he ends up back in the bullpen, and don't be afraid to use Clay Rapada for a key lefty out every now and then to give Logan the day off.  He's a vital piece of the bullpen and needs to be at his best when the games count the most.
Posted by Unknown at 1:24 PM