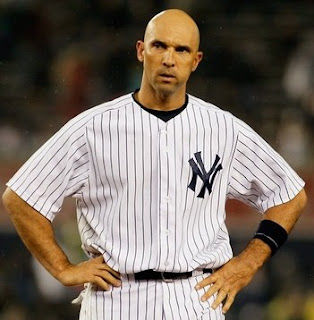 Ibanez's K rate (11.6%) and BB rate (season-high 10.1%) this month don't indicate much of a change in his approach at the plate, but the drastic change in his contact rates points to a lack of power and energy.  After being above 20.0% in each of the first 2 months, Raul's LD rate in June is just 13.0% and his GB rate his climbed to 50.0%.  He isn't hitting the ball very hard and isn't getting a lot of lift on his swing, and with him being a guy who turned 40 on June 2nd and has started 33 of the past 44 games he's played as an outfielder I could understand why that shift in contact rates could be occurring.

I made my case recently for why I felt the Ibanez/Andruw Jones platoon strategy should continue to be implemented even without the convenience of the DH spot.  I'll make the same argument here again and expand it to include Dewayne Wise and Jayson Nix.  Neither of them are everyday players, but they've shown that they can hold their own both in the field and at the plate. Why not use them more often and get Ibanez, the oldest position player on the roster, some days off?  Ibanez has already played way more outfield than the Yankees probably ever envisioned him having to play this season, and he probably has way more at-bats than they thought he would have at this point.  He's gone above and beyond the call of duty for the team because the situation called for it, but to make sure he can continue to be productive for the remaining 88 games, it would behoove Joe to get him out of the outfield, off his feet, and on the bench for some more rest here and there.
Posted by Unknown at 12:56 PM