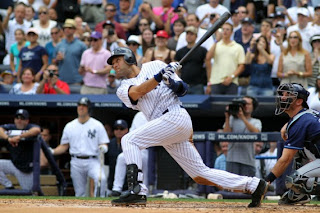 2011 was a big year for Derek Jeter in terms of coming to grips with the player he was at age 37 and realizing that he had to adapt to continue to be an above-average hitter.  2012 will be the real test to see if he can continue to stay one step ahead of the game as opposing pitchers now have half a year's worth of at-bats and tape from the second half of 2011 to study to come up with a new plan of attack for him.  It's important to remember that Jeter could very well make the right adjustments and still end up having his 2012 numbers decrease from where they were in 2011.  That's the nature of the beast when you're a 38-year-old Major League Baseball player.  But if Jeter is going to have any kind of success in 2012, these are the things he needs to focus on.
Posted by Unknown at 10:00 AM