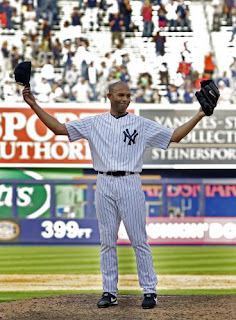 This one may generate some eye rolls from people, and it's understandable.  It certainly seemed like there were more instances of Boone Logan being brought in to face a lefty and either walking or hitting him than there were instances where he got him out in 2011.  But when you look at the numbers, Logan's 2011 was actually better than his 2010.  Career bests in K/9 (9.94), BB/9 (2.81), FIP (3.29), xFIP (3.43), and WAR (0.7) were overshadowed by his uneven performance against left-handed hitting, the job that he's out there to do.  But his peripherals against lefties, especially the better strikeout (11.20 K/9) and walk numbers (2.30 BB/9), suggest that there might have been some bad luck involved with the pitches that got away from him in 2011 and things could have worked out quite differently if a handful of pitches went a different way.  Logan has had the two best years of his career in pinstripes, and he's a pitcher who's still learning and evolving his game to be an effective LOOGY.  I think with continued work on his approach with Rothschild and Harkey and increased familiarity with some of the hitters he'll be facing, we could be in line for a repeat of his 1.87 "vs. LH" FIP of 2010.

It sucks to say, because I was a big fan of his work last season, but Cory Wade is the leading candidate for the Edwar Ramirez/Jose Veras Memorial "One-Hit Bullpen Wonder" Award for 2012.  His 3.76 FIP value, almost 2 runs higher than his 2.04 ERA, suggests that Wade was the recipient of some very good luck in 2011, and his 91.2% strand rate supports that theory.  Wade's greatest strength is his ability to throw strikes, but his problem is that his stuff isn't quite good enough to generate swings and misses consistently.  For the roll he's expected to play in the Yankee bullpen, Wade should be more than serviceable.  But the more high-leverage innings he throws, the more the Yankees are at risk of having that plan backfire and blow up in their faces.  There's only so long you can get by throwing first-pitch fastballs in the high-80s in the AL East before teams start getting hip to your jive and depositing those offerings in the bleachers.  And for a flyball pitcher like Wade, that's a dangerous tightrope to walk.  If he can mix up his offerings, he can still be successful.  But even if he does do that, I see Wade taking a step back in 2012.

He might not be back until mid-summer at the earliest, and it will be nice to see Joba and his flat-brimmed hat back on the mound this coming season, but coming off of TJS he's likely to experience some tough times.  And it's a damn shame too, because Joba was having a good start to his 2011 season, save for some bad HR luck.  His stuff was back on the upswing, he was starting to be more consistent with his command, and those kind of improvements from him could have been the key to the 2011 Yankee bullpen re-enacting the days of the Cincinnati Reds' "Nasty Boys."  Command has always been Joba's major bugaboo, and traditionally for guys coming back from Tommy John, that's the thing they struggle to regain the most.  If that's the case for Joba, then 2012 will be a rough go, even rougher if his velocity doesn't bounce back quickly.  With that in mind, the Yankees would be wise to use him in lower-leverage situations this season, let him round himself back into form, and then be ready to go full speed ahead in 2013.

Without Joba and without Soriano for a major chunk of time, the Yankee bullpen was still one of the best in the business in 2011.  With both of those guys back in the fold in 2012, hopefully the entire fold for Soriano, they should be just as good if not better, even if other pitchers experience some regression.  The back end of the 'pen still needs to be filled out, but those spots could be a revolving door as the season goes on.  The bulk of the high-leverage work is going to come from this core, and that's a good thing if you're a Yankee fan or Joe Girardi.

I don't think I'm going to bother touching the bench players in this series, so if you feel inclined to check back to the previous versions of the Triple-R Game, even if you're just looking to bookmark them so you can call me an idiot at the end of the season, you can find them all right here:

The Rotation (no longer valid.  I should probably update this one.)
Posted by Unknown at 9:00 AM