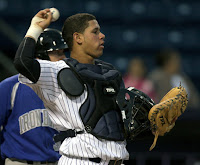 With a certain son of the Lord poised to make his full-season Major League debut in 2012, the new "next big thing" catcher in the Yankee system will be Gary Sanchez.  Sanchez is still a baby at 19, but already has 2 very productive MiL seasons under his belt.  After punishing the GCL and more than holding his own as an 18-year-old in 2010, Sanchez received a promotion to Low-A Charleston in 2011 and after a very slow start rebounded to finish with a very good .256/.335/.485 tripleslash, 34 XBH (including 17 HR), 52 RBI, and a .364 wOBA.  His season was not without some controversy, though, as Sanchez was sent down to Extended Spring Training for a short time because of "attitude problems," and there are plenty of questions about his prospects of remaining a catcher moving forward.

Sanchez is a top prospect because of his bat, there's no doubt there.  He already possesses well above-average power and can put the ball all over the field.  His K rate is still a bit high (27.1% this past year), but when you remember the age you can live with it.  Sanchez does offset that a bit with some good plate discipline; his 10.5% BB rate in 2011 was a new career high.  But it will be his ability to improve behind the plate that will determine how hot a prospect Sanchez becomes as he moves to the upper levels.  At 6'2"/195 he is already a big body and could get bigger as he matures.  His defensive skills were questionable at best to start 2011 and he didn't get nearly the positive reviews that J.R. Murphy did in reports about his progress.  And while I'd like to rank Sanchez higher because of his potential ceiling as a hitter, I think the concerns about his character are something worth holding against him.  Young or not, it's not consistent to criticize Slade Heathcott about his character issues when all signs point to him being a dedicated player on the field, and then not address similar issues with Sanchez when his are on-field-related.  I think Sanchez gets the jump to High-A to start 2012 to see how he handles the the next level, and if he's improved his defensive abilities and his attitude, he could be the new #1 prospect this time next year. 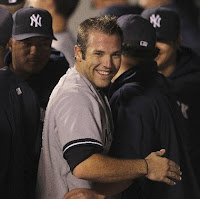 Despite a down year for him in 2011, I still ranked Romine ahead of Sanchez because he's much closer to becoming a Major Leaguer and even got a taste of that life in 2011.  Romine stumbled out of the blocks a bit in 2011 for Trenton and never fully recovered, but still finished with a respectable .286/.351/.378 line and a .332 wOBA for the Thunder in 373 PA.  At the end of the season, Romine was shuffled up to Triple-A to fill a gap and then spent some time in September as the backup to Russell Martin after Francisco Cervelli went down.  He only got 20 PA there, but did get the chance to show off his skill set and put himself in line for a possible backup role again this year.

Romine isn't as flashy as the other Yankee catching prospects with his bat, but may be the best defensively, even if there are mixed reports out there as to just how good he is behind the plate.  Romine is 6'1"/195, and a right-handed hitter who has always had the reputation of having just enough power and general hitting skills to get by.  Baseball America still projects him as a possible .270, 10-15 HR guy at the Major League level, which is enough to get you All Star consideration these days, but his lack of power in 2011 was a bit of a concern (.092 ISO in Double-A).  He'll also have to tighten up his approach at the plate to be successful as a hitter at the upper levels, but the tools are all still there.  With 2011 being the down year that it was for Romine, I expect the Yankees to start him off in Triple-A again in 2012 to see how his skills have progressed.  If he shows enough, it might signal that he's ready to be the "real" backup to Martin and inspire the Yankees to move Cervelli.

The bigger, and potentially better, of the 2 remaining Killer Bs, Dellin Betances continued his march to the Majors in 2011, even if that march included a few missteps and some potholes here and there.  After having a big breakout season in 2010 (2.19 FIP, 11.4 K/9, 2.32 BB/9 in 85.1 combined IP), Betances was on the radar as having an outside shot to make the show in 2011 if he continued to show that form.  Unfortunately, his command regressed back to its usual inconsistent level (4.99 BB/9 in 126.1 total IP), but the stuff and strikeouts were still there and Betances earned a late-season promotion to Triple-A after making 21 starts for Trenton and posting a 3.42/3.70 ERA/FIP split.  He's still a work in progress at 23, but the sky is still the limit for Betances because of the talent he possesses.

Betances' biggest strength and weakness is probably his size.  He stands 6'8" and 245 pounds, an intimidating presence on the hill to even the most badass of guys, and uses that size and length to throw the ball right by hitters.  But his height also gives him problems with repeating his delivery, and as a result his location and command of his electric stuff is usually hit or miss.  And to call his stuff electric is not an overstatement.  He's got his fastball back up to 95-98 MPH range as he's gotten further away from elbow surgery, and his power curve is damn near unhittable when he locates it.  Betances is also working on a changeup, but that pitch is nowhere near the levels of the other 2.  Along with the delivery/command issues, Betances is still learning how to effectively utilize all his pitches, something that I can give him a pass on because of all the time he's missed with injuries.  He'll begin the 2012 season in the Triple-A rotation and will be watched very closely as a potential mid-to-late-season call up for the Yankees.  His ability of lack thereof to harness his stuff will determine whether that comes in a starting or relief role. 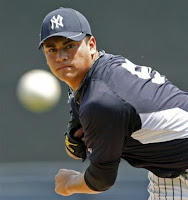 Manny Banuelos is kind of the polished yang to Betances' erratic yin as the other half of the Killer Bs.  And for that, he is considered to be the top Yankee pitching prospect across the board.  Banuelos has had a reputation as a pitcher advanced beyond his years almost since he was introduced into the Yankee system in '08, and expectations were high for him in 2011 after also reaching Double-A with impressive peripherals as a 19-year-old in 2010.  But like Betances, Banuelos struggled with his command in 2011, both at Trenton and in his 7 late-season starts for SWB.  The stuff was definitely still there as ManBan racked up 125 Ks in 129.2 combined innings at both levels, but the increased BB rate (almost 5.00/9 IP) did temper the buzz on him just a bit.  That aside, ManBan is still looked at as a potential ace in the making and should be.

ManBan isn't nearly as physically imposing as Betances.  In fact, he's not imposing at all at 5'10"/170.  But what he lacks in stature he more than makes up for with a great combination of stuff, great composure on the mound, and a knack for pitching that almost nobody has at age 20.  Manny's fastball has improved over the past year or so, and he can now throw it regularly in the low-to-mid 90s, his changeup can fool the best hitters in the world, and his curveball is rapidly becoming a plus-level offering.  And when that combination is coming at you from the left side, you're in for a bad time as a hitter.  The Yankees have a storied history of great lefty pitchers and Banuelos is poised to become the next on the list.  He's already made his way to the highest MiL level in 3+ seasons, and could step in and pitch in the Yankee rotation this year if he had to.  With guys like Phelps and Warren around, though, the Yankees don't have to rush him and likely won't.  In a perfect world, ManBan will spend the entire 2012 season in Triple-A, working on refining his command and building up his innings totals.  But if there are major rotation issues in the Bronx, he could be a "lightning in a bottle" option for the Yankees to consider.

And now, the first ever AB4AR #1 Yankee prospect... 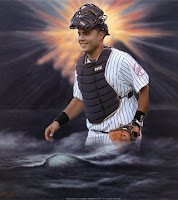 As if there was any doubt.  I know he made his Major League debut this past September, but he didn't rack up enough ABs to lose his 2012 rookie status and that still makes him a prospect in my book.  Unless you've lived under a rock for the past 3 years, you know all about The Jesus.  He's lit up Minor League pitching since the day the Yankees introduced him to rookie ball in 2007, quickly establishing himself as one of, if not THE premiere hitting prospect in the Minors.  He continued his assault in 2011, posting a .288/.348/.467 tripleslash for SWB in 463 PA along with 18 HR, 67 RBI, and a .356 wOBA, and then tuned up Major League pitching in a 69-PA debut in September with an eye-opening .328/.406/.590 line and 8 XBH.

Montero is almost exclusively a bat-first prospect, which is the only thing keeping him from potentially being the next great catcher of all time.  But his bat is more than enough to make up for his defensive deficiencies, as he displays power to all fields, an ability to hit the other way that no 22-year-old should rightfully have, and a well-disciplined approach at the plate.  He doesn't draw an insane amount of walks for a power hitter of his caliber (7.8% at SWB in 2011), as Montero uses his discipline to work the count in his favor so he can unleash hell on the pitch he wants, and pitchers will learn quickly that you can't just throw the ball up there and expect him to hack and miss.  He's been compared to Miguel Cabrera at the plate and could reach those levels of production if he puts everything together.

Like Gary Sanchez, though, his defensive issues are just as much a talking point as his skill at the plate.  He's big at 6'4"/225, and has never shown the quickness and good hands to handle top-level pitching.  With the Yankees covered behind the plate and at first base, and with Montero not being quick enough to transition to the outfield, he'll open the 2012 season as the Yankees everyday DH.  Right now there's no indication that they are willing to give him a real shot at catching in the Majors, but it would be to their benefit to see just what Montero can do with their staff at some point.  Either way, Montero's ceiling as a hitter is more than enough to make him the #1 prospect in the system and the early favorite for 2012 AL Rookie of the Year.

So there you have it, folks.  The final, complete list for my inaugural Top 30 Yankee prospects.  Let the debate begin now.  Who did I put too high?  Who did I put too low?  And who will assume the throne that Jesus will vacate in 2012 as he becomes a full-time Major Leaguer?
Posted by Unknown at 12:48 PM

Thank You this was the most in-depth look at the minor leagues I have seen and is a great way for me to start following some of these players.

Glad you enjoyed it, David. Even though I know it's bad for me, I'm a huge prospect hugger and have been meaning to do this for a while. It was fun to put together.