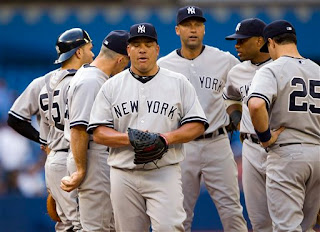 For the sake of Bart, I'm going to step up and take the blame on this one.  Sorry, dude.  I didn't mean to jinx you.  And your D didn't mean to shit the bed behind you.  Don't worry about the hammy, just go out next time and pitch your game.
Posted by Unknown at 8:28 AM