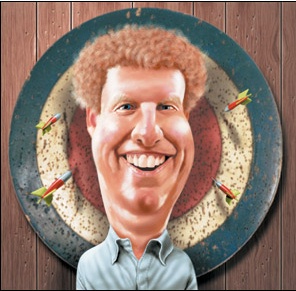 "During batting practice, the field was littered with assorted sponsors, frauds, and celebrities. A guy who hates Republicans (Keith Olbermann) stood alongside a guy who hates the Patriots (Bill Polian)."

I would hardly call Keith Olbermann and Bill Polian celebrities.  And even if I did, the fact that they were the highest-level celebs that you could mention at a New York-Boston game speaks to just how meaningless the game was.  I wouldn't give a shit if Bill Polian was present at the Super Bowl.  If the Colts were in it.

And as far as the "frauds" line goes, we get it.  The Red Sox were playing.  Understood.

Because they weren't there.  Because the game didn't mean anything.

Because the game didn't mean anything.

"Meanwhile, Francona went with 8/9ths of his everyday lineup."

Because he's an idiot.

... who will be out of the lineup for the next 4-6 weeks with a vicious combination of a yeast infection, a hangnail on the ring finger of his right hand, and some mild seasonal allergies.

"It marked the first time Carl Crawford and Adrian Gonzalez ever appeared on the same lineup card."

Crawford AAAAAAAND Gonzalez???  In the same lineup?!?!  TOGETHER?!?!?!?!  Mark down the date, ladies and gentlemen.  The day that they almighty Crawford-Gonzalez duo finally played in the same game and began their journey to rewrite the baseball record books and make Gehrig and Ruth look like a couple of beer league softball bench warmers.  Truly this game will go down in the annals of time as one of the greatest ever played for this reason alone!

"It always comes down to pitching and at this juncture, the Sox have more."

I'm not even going to get into the fact that Boston has just as many questions and issues with their rotation as the Yankees do here.  There's 162 more games for that.  I'll just let Dan have his fun using the 5th-grade "quantity over quality" logic.

"Mariano Rivera is still the best closer around, but Boston loves its trio of Jonathan Papelbon, Daniel Bard, and Bobby Jenks."

That's right.  They love Pap and Bard so much that they brought in a guy worse than them to take some of their innings.  They're just OOZING confidence!

"Papelbon came in for the fifth, to the tune of 'I’m Shipping Up to Boston.'"

The "Star Spangled Banner" to Massholes.

"The Big Galoot got the side in order. Sitting in the Sox dugout, Olbermann seemed pleased with the Big Galoot."

As if that should matter to anybody even remotely interested in the Red Sox.  And why the hell would you let Keith Olbermann sit in your dugout?

"The audacity with which the clubhouse attendant, one known for committing such atrocities in the past, would toss the bags of sunflower seeds into the dugout bins will not go unnoticed by this reporter.  You, sir, have not only damaged the structural integrity of these seeds, but the very fabric of America with your right-wing, dictatorial actions.  Tommy Flanagan, you are today's worst person... IN THE WOOOOOORRRRRRRLD!"

"The Sox finished the spring 2-0 against the Bronx Bombers."

Which means EVERYTHING to them.  They are now in the right frame of mind to dominate the American League after winning a ST game against Romulo Sanchez and Luis Ayala.

"They’ll play 18 times this season, starting three weeks from Friday in the 100th Fenway home opener. Then comes the ALCS. We expect it to go the full seven games. Just like in 2003 and 2004."

Ugh.  Just ugh!  That right there epitomizes how awful Dan Shaughnessy is.  It's not that he actually believes the Sawx and Yankees are predestined to meet in the playoffs this year, it's that he knows so many other fans out there do, and he writes that sentence to cater to their ignorance and simple mindedness.  There is no "we" in that statement.  Any baseball fan with half a sense of how the game works knows that there are a million things that could happen over the course of the next 6 months that could help or hurt each team's chances of making the playoffs.  And even then, there's no guarantee that they will face each other.

Just shut up, Dan Shaughnessy.  Shut your mouth, know your role, and for the love of God, stop writing.

If you think Dan Shaughnessy is a good sports writer, you suck.
Posted by Unknown at 12:51 PM