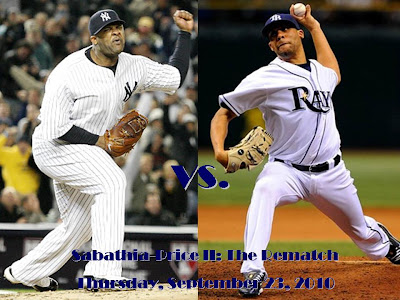 Stock the fridge, turn off your phone, put the kids to bed early, and clear your schedules, people.  It's round 2 tonight for CC and David Price.

In one corner we have Carsten Charles Sabathia.  Listed at 6'7" and 290 pounds, CC has 20 wins to his credit this year, a 3.05 ERA, a 1.18WHIP, and a bunch of other stats that support his status as one of the premiere starting pitchers in all of baseball, not to mention he has the power of the parachute pants in his corner.  He is the crafty veteran in this matchup and pitching on his home field tonight, where he has been almost unbeatable this season, and tonight will be looking to lock down a series win and a solid 2.5 game division lead for his club.

In the other corner we have the youngster, David Price.  Price is 17-5 on the year with a 2.79 ERA, a 1.19 WHIP, and 172 Ks to CC's 183.  Price, like Sabathia, has been the anchor of his rotation this year, the one constant in a swirling torrent of inconsistency around him.  He has faced the Yankees 3 times already this year with mixed results, his worst outing coming in a loss in July at The Stadium where he was slapped around for 7 ER on 7 hits and 4 walks in just 5 innings of work, taking the loss in the process.  He will be looking to exorcise those demons and exact some revenge tonight.

I've just finally gotten over the fact that I missed the gem of a performance that these 2 put on last week and now I get to once again miss out on what could be a matchup for the record books.  Why the fuck did I ever move out to Wisconsin in the first place???  My only hope is that Price comes out and spits the bit again and puts up a repeat of his last outing at The Stadium.  At least then I won't feel so bad about missing it.  You people with access to YES don't know how good you have it.
Posted by Unknown at 3:41 PM