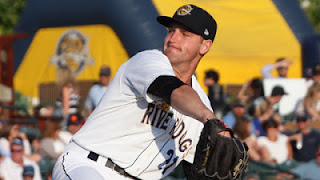 
Enns, 22, is a left-handed pitcher of average build (6'1"/195) with a 3-pitch mix.  He throws a low-90s fastball, a real good changeup, and a curveball.  As a college pitcher, he has a reputation for mixing pitches and changing speeds well and he's worked almost exclusively as a reliever from his college career to present day.  He had success out of the 'pen at CMU, in the Cape Cod League, and now in the lower levels of A-ball with the Charleston Riverdogs.  In 35.1 IP this season, Enns owns a sterling 0.76/1.19 ERA/FIP split with 58 strikeouts (14.77 K/9, 42.0% K rate).

What sets Enns apart from most lefty relievers, and what makes him an intriguing prospect, is his ability to pitch multiple innings and not get funneled into the LOOGY category that swallows up so many southpaws in today's baseball world.  His 35.1 IP this season have come in just 16 appearances for Charleston.  Only twice has he thrown just 1 inning and 5 of his appearances have been at least 3.0, including the last 3.  Whether he eventually settles into a matchup role remains to be seen, but his ability to work both righties and lefties effectively right now and his ability to pitch multiple innings makes him a very rare type of middle relief option.

There is still room for improvement in Enns' game as well.  His BB rates have been above 3.00 in both of his short professional seasons, this year's currently sits at 3.31 BB/9, so his command can be sharpened up some.  He'll probably also have to further develop his curveball if he hopes to keep it as an effective pitch at the higher levels and continue to show that he can consistently locate down in the zone.  He hasn't given up a HR yet as a pro, so that already appears to be going well.  Adding a little velocity probably wouldn't hurt either, but lefties have a much easier time getting by without that and Enns' early K rates suggest he's got plenty of stuff.

The Yankees are great at mining the middle and later rounds for relief pitching gold and the early returns on Dietrich Enns make him look like another example.  He hasn't gotten the attention that guys from earlier rounds like Nick Goody and Corey Black have, at least not yet.  If he continues to mow down hitters and gets a mid-season promotion to Tampa, that might start to change.
Posted by Unknown at 11:05 AM

So Delighted to hear about you!!......Rev. Dietrich Henry Enns, b. 1876-1957-dec., is the original
Dietrich Enns, esaped the tryanny of Russia as a youth. He was my father=in-law, a man of God, faith and loving husband & father of 14. The family loved sports especially BASEBALL!!! Also a farmer, homesteaded 600 acres in Hooker, Oklahoma!!!

Plan to keep in touch with your success as a left handead pitcher......PS....there are many LEFT HANDED IN OUR ENNS CLAN...my husband, Victor and our eldest son. An Enns niece, in college, wrote a research on "LEFTIES" in our Enns family.