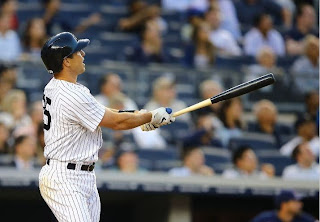 
In their 4-game sweep at the hands of the Mets, the Yankee lineup scored just 7 runs and averaged 129.5 pitches seen per game, with just 2 walks drawn in those 4 games.  Both walks came on the May 27th game, and while it's perfectly acceptable to get shut down by Matt Harvey, striking out 12 times against the likes of Dillon Gee while keeping his pitch count below 100 is just unacceptable and not even remotely Yankee-ish.

Since Teix and Youkilis returned, the Yankees have averaged 137.2 pitches seen per game - not including the rain-shortened Sunday night game - and have drawn a total of 19 walks in those 5 games.  They've gone 4-1 in those games, scoring 18 runs total.  Not world-beating numbers by any means but much better and more Yankee-like results.  And it's not like it's been Teix and Youkilis doing all the dirty walking work.  They've combined for just 5 of those 19 walks.  Whether it's opposing pitchers changing their approach a little or the rest of the lineup smartening up, not pressing, and taking pitches or both, things are starting to get back to normal.

Now there's been some great starting pitching that's helped secure these recent wins, and it never hurts to have your power guys (like Teix) start hitting the ball over the fence again.  But everything with the Yankee offense works off the formula of being patient, working counts, grinding out at-bats, and wearing pitchers down.  It's what Teix and Youkilis do well, it's what the team has started to do again this week, and it's helped fuel the offensive turnaround.
Posted by Unknown at 2:49 PM