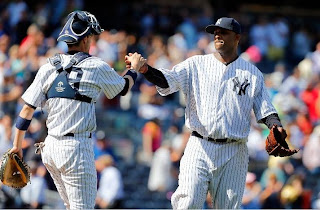 - Sabathia: 9 IP, 7 H, 4 ER, 1 BB, 9 K.  Not a huge fan of letting him go the full 9, but whatever.  CC was money today and his upward trend continues as he gets deeper into the season.  4 ER doesn't look good and it doesn't tell the story.  The 6th was a bunch of BIP garbage and the only bad pitch he made was the one to Gomes.  Slider was just dirty.

While the Indians go get their shine box, the Bombers are off the West Coast for another visit with Seattle.  It's a weekend 4-gamer and it kicks off tomorrow night with Phil Hughes and Aaron Harang.
Posted by Unknown at 7:40 AM