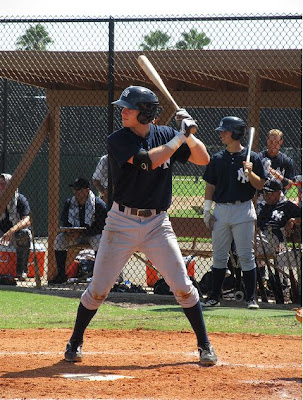 July is over, which means we're heading into the dog days of summer in August.  Or are we already in the dog days of summer?  It's been hotter than hell out in Wisco for the better part of July, so to me that constitutes dog days.  But then again, I don't make up the rules.  Maybe July is designated by another creature and August is officially the dog days and I'm breaking all kinds of seasonal description protocol by mixing them up.  Whatever.  The changeover to August also means it's time for another round of Minor League monthly recaps and there's plenty to recap.  All the 2012 picks are signed and playing, so that's exciting.  And the much-anticipated round of call ups took place earlier in the month for some of the higher-profile prospects.  We start the MMLR, as always, with the lower levels.

Between higher-level guys rehabbing in GCL games and just an overabundance of arms in general, there haven't been a lot of innings to go around for the pitchers on the staff, but some of the more intriguing young guys are starting to make some noise.  Jordan Cote continues to impress as he starts to get stretched out as a starter.  He didn't allow an ER in his 3 July appearances, the last 2 of them starts, and his very impressive 0.98 ERA and 25/4 K/BB ratio over 27.2 total IP on the season earned the 19-year-old a promotion to SS Staten Island.  Lefty Daniel Camarena has finally overcome his injury problems and looked good in his first 2 professional appearances (6 IP, 1 H, 0 R, 0 BB, 5 K), and after coming to terms on his deal, 2012 1st-round pick Ty Hensley made his pro debut last night.  His results weren't as good as Camarena's, but the important thing is that he's pitching and giving fans and scouts a chance to evaluate him.

Offensively, Hensley's fellow 2012 pick Austin Aune, one of the Yankees' 2nd-rounders, has looked good in the early part of his first pro season.  His .292/.391/.417 slash line (.382 wOBA) is solid, and his athleticism has been as good as advertised on the basepaths and in the field.  A pleasant surprise has been his patience at the plate.  Aune's 14.8% BB rate is very impressive for an 18-year-old HS player and a sign that he could adapt quickly to facing better pitching.  His double play partner, Jerison Lopez, also continues to hit well.  Lopez's .847 OPS and .402 wOBA leads the team, and doesn't come as a surprise seeing as this is his 3rd year at this level.  Outfielders Mikeson Oliberto (.815 OPS) and Yeicok Calderon (.775) have provided some power in the lineup.

The W-L record isn't pretty, which probably doesn't spell good things in the way of this team's ability to repeat last year's squad's Penn League title, but that's hardly the most important thing at this level.  What is important right now is that there's a collection of 2012 draft picks putting up pretty good offensive numbers.  10th-rounder Matt Snyder has a .398 wOBA in 144 PA, more on the strength of his 11.4% BB rate than his .139 ISO, and the same can be said for 8th-round OF Taylor Dugas and his 29 BB and .414 wOBA.  The real gem has been Saxon Butler, a 33rd-round pick who has done nothing but mash since joining the club (.304/.376/.638, .455 wOBA).  2nd-round pick Peter O'Brien and prized international prospect Ravel Santana are still trying to get going, very disappointing for Sanatana, but there's plenty of offensive talent to be had here.

On the mound, there are still way too many walks being handed out by the starters.  Evan Rutckyj and Gabe Encinas have been the most effective starters on the staff, but their lines could look even better.  Rutckyj's 3.28 FIP could be sub-3.00 if he hadn't walked 21 in 43.1 IP, and Encinas' 2.77 ERA is misleading because of his 21 free passes allowed in 39 IP.  They're both young kids, and Rutckyj is a big lefty whose still working on mastering his mechanics and fully harnessing his stuff, so there's reason to be optimistic about him.  2012 4th-round pick Corey Black has been very solid so far (2.49 ERA/3.57 FIP, 16 K/7 BB in 21.2 IP).

The starting rotation continues to be a weak spot for the RiverDogs, who really started to struggle in that department once they lost some key guys to injury (Jose Campos) and promotion (Caleb Cotham).  Brett Gerritse was actually the best starter in July, allowing 8 ER in 6 starts, although 7 of them came in his last 2 starts.  Bryan Mitchell continues to show the plus stuff that makes him a high-ceiling prospect, but also continues to show the command issues that limit his potential.  His ERA is up to 5.13 on the season, and while his 4.03 FIP is controlled by his ability to keep the ball in the yard, his 5.71 BB/9 is a career high.  At the back end of the pitching staff, the duo of Phil Wetherall and Pedro Guerra continues to rack up strikeouts (114 in 106.1 combined IP).
Posted by Unknown at 11:00 AM