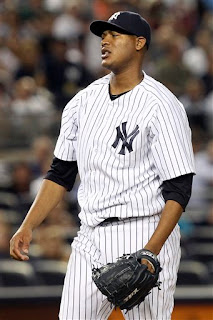 I almost can't put into words how awful this game was last night.  If you watched even the first third of it, you know exactly what I'm talking about and you're shaking your head in agreement right now.  I sat at my computer, already typing out the results of the 1st inning, and watched with each heartbreaking ESPN Gamecast refresh as Ivan Nova let the 5-run lead he was staked to evaporate and turn into a 2-run deficit in a matter of minutes.  I was so distraught by what happened that I actually called my dad at home in Connecticut and just started venting.  Eventually we steered the conversation towards "The Dark Knight Rises" and the stupidity of people complaining about Bane's voice, but that still didn't and doesn't take away from the collective crappiness that was this game.

- I bet Chris Tillman didn't expect to get 5 runs thrown in his grillmix in the bottom of the 1st but that's just what happened.  The Yankees were swinging with authority, Tillman wasn't fielding his position, and things escalated quickly.  A Robinson Cano 2-run homer was the big hit of the inning and the Yankes were off and running.

- It was probably equal parts Tillman settling down and the Yankee lineup being deflated by the events that transpired in the 2nd, but they were held scoreless through the next 6 innings and managed just 4 hits in those innings.

- Meanwhile, Nova continued to get shelled like a bag of stadium peanuts.  He gave up a pair of doubles and a run in the 3rd, and another run in the 5th to make it 9-5 Orioles.  Of the 10 hits that were charged to Nova's tab, 5 of them were XBH.

- A change in pitchers did nothing to shake the offense out of their Nova-induced coma.  The Yankees manged just 3 singles after the 5th inning, 2 of them infield singles by Derek Jeter.  Not counting the Cano HBP, which I don't, the Yankees only advanced a runner to second base once after the 3rd inning.  Talk about laying down and dying...

- Clay Rapada gave up a 2-run homer to add insult to injury in the top of the 8th.  Curtis Granderson grounded into a game-ending double play in the 9th to put the game out of its misery.

- Nova: 5 IP, 10 H, 9 ER, 1 BB, 5 K, L.  Just an absolute "dick knocked in the dirt" kind of night for Nova.  In the top of the 2nd, he got beat on every single type of pitch he throws.  He didn't locate anything, and was absolutely terrible outside of his 6-pitch 1st inning.  Mike Axisa painted the picture perfectly on Twitter last night with his breakdown of Nova's ERA by month.  This is starting to become a real issue, and it's not acceptable.

- Granderson: 1-5, 1 R, 1 RBI, 3 K, LOB.  Yeah, yeah, the RBI single in the 1st was nice, but after that Curtis would have been more productive just sitting on the bench and forfeiting his at-bats.  The game-ending GIDP was the rotten cherry on top of the shit-flavored sundae that was this game, and Curtis has now struck out 19 times in his last 10 games.  That's too goddamn much, bro.  You don't deserve the "C-Grand" nickname with that kind of output.

Phil Hughes and his league-leading 25 home runs will toe the rubber tonight to try to keep the division lead from getting down to an MSM panic-inducing 4.5 games.  I'm sorry I can't be more positive, but last night's game was just a complete heart-stomper.  Zach Britton isn't much on paper, but with the way this lineup is hitting right now, you never know.
Posted by Unknown at 6:56 AM