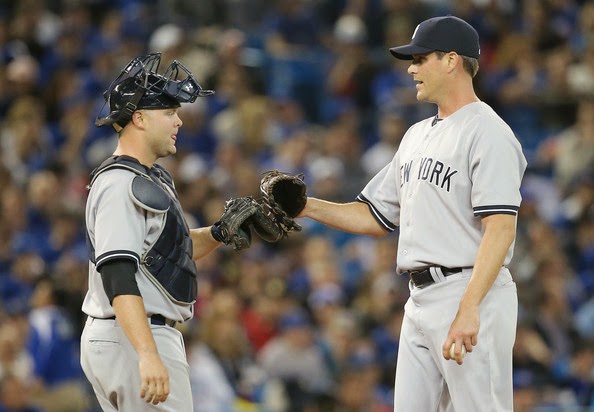 Wade LeBlanc?  That was no coincidence that the Yanks claimed him.  Yeah he looked pretty terrible in his team debut the other night and there's a real strong chance he sucks as bad as Cesar Cabral sucked earlier in the season.  The fact that he is a lefty is significant though, regardless of how good or bad an option he may be as a lefty specialist.  Think about it.  If the team was happy with what it was getting from its lefty specialist, why would it make a waiver claim to add a second lefty reliever to the 'pen?  It's not like the D-Robs, Warrens, and Betanceses of the team can't handle their own against lefties, so the number of important LOOGY situations was already at a premium.

And I don't know if you caught the draft last night, but the Yankees happened to take a left-handed reliever with their pick at 55.  A kid named Jacob Lindgren.  He has a fastball that he can throw as hard as yours and a slider that multiple scouting reports called "unhittable" for lefties.  He's a college pitcher too, so he should sign quickly and he's going to move very quickly through the system.  There are scouts who think he's good enough to get Major League left-handers out right now.

If you want to point to your results as proof that you're safe and have nothing to worry about, that's cool.  The 3.75 ERA and 3.15 FIP look very good.  You haven't given up a home run all year and you've got a GB rate of 52.6%, so chances are you've gotten burned by the bad infield defense a team or 2.  But what about the 14 hits in 12.0 innings pitched and what about 9 of those hits coming off left-handed bats?  What about the 3 hit batsmen?  What about the low strikeout numbers (10 total) and the fact that your K rate against lefties is lower (16.7%) than it is against righties (19.1%)?  What about the 24.0% LD rate for lefty hitters against you?

Small sample bias or not, the theme here is that you're not really getting your job done as a LOOGY.  You're putting too many guys on base, you're not getting swings and misses and strikeouts from left-handed hitters, and whether it's bad defense, bad luck or both, you hardly ever seem to get the big out when Joe really needs you to.  If Dellin Betances is the bullpen's new fireman, you're the lighter fluid.

I'm not saying it's happening today or tomorrow and I'm not even saying it's happening anytime soon.  But if you can't see it starting to happen, then you could be in some trouble.  The Yanks are looking for somebody who can do your job better than you can, and when they find that somebody you're going to be a goner.  My advice to you would be to start pitching better and start striking some more lefties out if you don't want that to happen.
Posted by Unknown at 10:00 AM