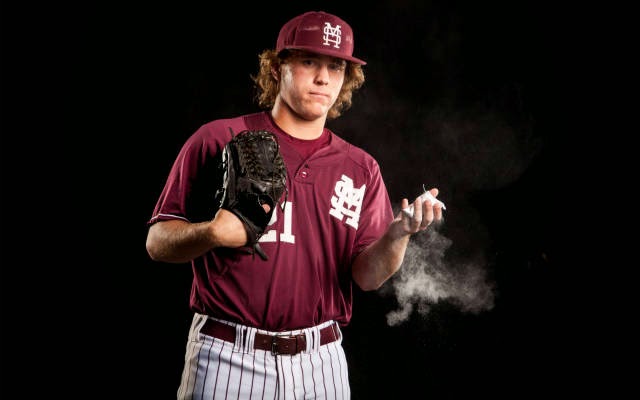 
Lindgren, a 21-year-old junior, worked exclusively out of the bullpen for the Bulldogs this past season after trying out as a starter the previous 2 years.  He pitched to a 0.81 ERA and 0.94 FIP in 55.1 innings pitched this year, with 100 K/25 BB, only 23 hits against, and not a single home run allowed.  He was easily the best relief pitcher on his team, one of the best in all of college baseball, and both his K and GB rates were right up at the top of all college pitchers.

Listed at 5'11" and 205 pounds, Lindgren is not built like a typical MLB lefty reliever.  He works exclusively with a fastball/slider combo and both pitches are plus pitches.  The fastball sits 91-95, up from the high 80-low 90s as a starter, and moves back in on left-handed hitters.  The slider is mid-80s, with a lot of sharp, late-breaking action, and it has been referred to as "unhittable" by some scouts.  Lindgren also used to throw a curveball and a changeup in his starting days, but has scrapped those to feature his 2 best offerings out of the 'pen.

Commenting on the selection, Damon Oppenheimer had this to say:

“Jacob has two Major League pitches that are above-average and possess swing-and-miss quality. He has been extended for multiple innings and holds his stuff consistently.  Jacob has been very successful in a tough conference and has produced exceptional strikeout numbers. We are very happy to have selected him.”

From those comments and from Lindgren's makeup, it's easy to see what the Yankees did here.  One of their Major League problem areas right now is their middle relief corps, which features the increasingly hittable Matt Thornton.  By signing a college left-hander with Lindgren's skill set, the Yankees are looking to add someone who they can move quickly through their system and possibly use as a Major League bullpen option this season.  Not a bad move at all when you're planning on spending a lot of money internationally this year.  There should be no concern about Lindgren's signability.  His college season is already over and I expect he'll be signed to something near slot value in the next week or so and begin his pro career soon after.

Lindgren offers upside as a legitimate MLB LOOGY option right now, potential future closer if he can maintain a high whiff rate in the pros, and most likely as a multi-threat, multi-inning left-handed reliever like Thornton was in his prime.  Solid selection by the Yankees in a situation where they only had 1 pick to add someone who can help at the Major League level soon.
Posted by Unknown at 7:49 AM