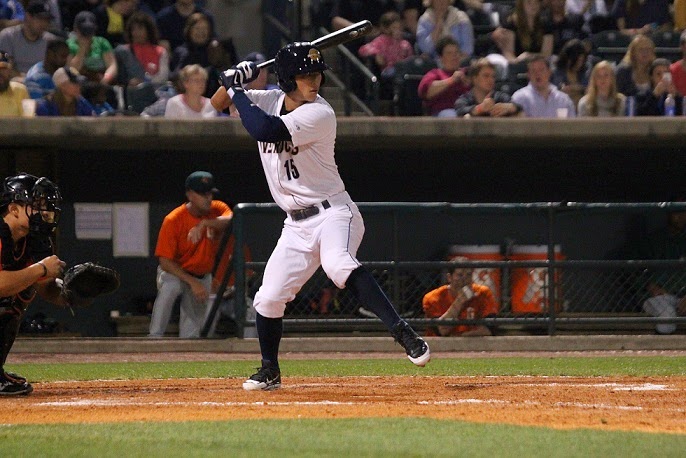 I've always been a closet Ramon Flores fan.  I dig guys who can consistently show the ability to make contact and draw walks.  Knowing the strike zone and putting the ball in play can get you a long way in the show.  Just ask Yangervis Solarte.  Those 2 skills have been Flores' calling card in his MiL career, but he took a step back last season with an underwhelming year in Double-A.  He got the bump to SWB this year anyway and he's really rebounded.  His May (.761 OPS) actually hasn't been as good as his April (.857), but Flores is hitting .363/.352/.453 on the year with 5 HR, 3 3B, 15 2B, and a 12.1% BB rate.  He's added a little thump to his game, he's already on the 40-man roster, and he's a young 22. There's a lot to like about him.

This isn't a knock on Montgomery as much as it's a statement about the how the rest of the top bullpen prospects have caught up to him.  Between Dan Burawa, the recently called up Branden Pinder, and the recently converted Jose Ramirez, the RailRiders have a lot of big name relief talent right now.  Montgomery can still strike guys out (28 K in 23.0 IP) and his 2.35 ERA looks good, but those strikeouts aren't coming at the really high rate they used to and Montgomery's control has seemingly gotten worse.  He's also walked 16 batters in those 23 innings.  Still a legit prospect, but not nearly the new hotness that he used to be.

A little underheralded after posting an .812 OPS in High-A ball last year, Refsnyder has started to make some real noise this season with an even better year at Double-A.  He owns a .304/.357/.473 tripleslash this season with 19 XBH and 28 R scored, and in May he hit .337/.361/.551 with 13 of those XBH, 16 R, and 12 RBI.  He's also shown himself to be a more than competent second baseman, and that's a position of future uncertainty for the Yankees.  Big window of opportunity for Refsnyder right now.

I don't know, he just isn't doing it for me this year.  He had a scorching hot April, but crashed back to earth this month with a .200/.264/.358 slash line in 106 May plate appearances.  His K and BB rates are both worse than what they were last year at this level, it doesn't seem like we're hearing as much positive chatter about his defensive improvements like we were a year or 2 ago, and now he's got Peter O'Brien around to steal his thunder with all of his power output.  I said it before the season and I'll say it again, this is the season where I want to see Sanchez take the big leap.  So far that hasn't happened.

If and when he makes it to the show, Cave is the type of player that MSM color guys are going to fawn over and call a "real baseball player" because he's so well-rounded and plays really hard.  Another year removed from surgery and rehab, Cave is really looking like the player the Yanks thought they were getting when they drafted him.  He's hitting .349/.410/.453 this month in 118 PA, which gives him a .319/.370/.427 line for the season.  He's hit for some power (11 2B, 3 3B, 2 HR), he's stolen 7 bases, and he's played a good defensive outfield.  He's only 21, but when the Double-A outfield clears out a little I could see Cave getting the first late-season call up.

Not quite Cito Culver levels of bad, but starting to look like a lost cause at the plate.  Gumbs, in his return stint to this level, is working with a .179/.257/.328 slash line this month.  That gives him a .239/.283/.331 season line that's barely better than what he did in 2013.  He's only got a 5.8% BB rate and he's striking out almost 25% of the time.  For all the "raw tools" people raved about a few years ago, Gumbs doesn't look like he has any of the important hitting tools like Flores has to be an effective hitter.  He's gotten worse as he's gone up the ladder since being drafted and he still isn't even out of A-ball.

I don't think Ford even qualified as a prospect at the start of the season simply because not a lot of people knew about him.  He was an undrafted free agent signed last year and he posted a .720 OPS in 136 PA at SS Staten Island.  Bumped up to the full-season leagues this year, Ford is currently rocking a .315/.420/.512 line for the RiverDogs with 8 HR, 27 RBI, and 29 R scored.  In May he's hitting .304/.429/.543 and he's formed quite the formidable middle lineup tandem with the much more well known Aaron Judge.  I don't think he's got much of a ceiling as a defensive player, so he's an all-bat prospect if anything.  But with as well as he's swung the bat here, he warrants a bump up to Tampa to see if he can keep it up.

I had high hopes for Cote this year, but it looks like the Yankees view him as a better reliever prospect than a starter.  That's understandable given his injury problems the last 2 years.  No sense in trying to work a cold weather kid into a regular starting pitcher if he can't even handle short season workloads.  He hasn't exactly handled the relief workload very well either in his first full-season experience.  12 games, 22.0 IP, 28 H, 9 BB, 18 K, 5.32 ERA.  Ouch.

With Davis, it's admittedly about me not being very familiar with him but recognizing his name.  I saw it a lot as a low-level sleeper arm in the system before the year and was expecting big things.  but he's gotten knocked around for the better part of his 8 starts thus far.  42 hits, 20 BB, and 21 ER in 38.1 IP.  He's only managed to pitch 10 innings in his 3 May starts and he's given up 7 ER in those games.  Probably doesn't help that he's got Luis Severino and Ian Clarkin in the same rotation or Caleb Smith and Jaron Long and their matching sub-2.00 ERAs.
Posted by Unknown at 12:00 PM