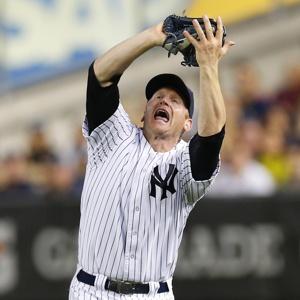 
For a first base lifer with no outfield experience, Overbay did just fine last night.  He made a good play chasing down a double in the gap and firing it back to the infield in a timely manner and managed to track and catch a bloop flyball into right field without issue.  But that's not the point of this post.  The point is that Overbay represented the best offensive option for the team in a time that they desperately needed more help on offense.  The Yanks entered last night's game having scored 1 run or fewer in 4 straight games and 4 or fewer in 9 straight.  Their current issues aren't with outfield defense, they're with scoring enough runs to give themselves a chance to win.  Joe, Cash, and whoever else had a voice wisely made the decision to address that issue at the expense of potentially weakening their defense.

And in examining the logic in making the decision, for at least last night's game, the Yankees couldn't have picked a better game in which to try this experiment.  They had Andy Pettitte and his groundball tendencies on the mound, and his left-handedness forced all the Indians' switch hitters to turn around and hit right-handed.  That, plus Mark Reynolds' natural pull tendencies combined to limit the potential number of chances Overbay would have in right field last night*, thus lessening the potential damage he could do if he turned out to be a complete disaster out there.

The chances were limited, Overbay handled them all without issue, Joe made the move late in the game to get him out and upgrade his defense when he needed to, and this can be chalked up as another check in the plus column on Joe's Manager of the Year resume.  Kudos also need to be handed out to Cash and his staff for knowing that Overbay was working in the outfield with the Fraud Sawx this spring before they signed him and knowing they had this emergency option available to them.  For as much as I and many others scoffed at their approach in building and utilizing this patchwork roster to open the season, almost every move and decision they've made has worked out.

*- h/t to Matt Imbrogno for pointing out the changes in the Indians' lineup last night that made playing Overbay in right less risky.  I never would have thought of that.
Posted by Unknown at 11:30 AM