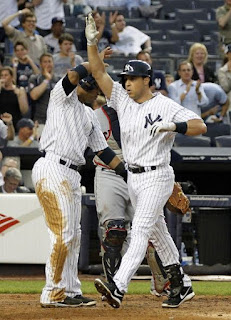 - Romine: 2-3, 2 R, 1 SB.  Nice little night at the plate for Romine, who's starting to look a little better, and a very good night behind the plate.  He had to move quick and make a lot of nice blocks with a shaky Andy and handled it well.

- Pettitte: 4.2 IP, 7 H, 4 ER, 3 BB, 3 K.  When he gets staked to an early 3-run lead and gives it back in just a few innings, you know something is wrong with Andy.  The ESPN guys seemed to think he hurt himself again on one of his early pitches during his 9-ball wild streak.  Certainly hope that's not the news we get in the next day or so.

- Cano: 1-5, 1 R, 5 LOB.  This game could have been a lot less close if Robbie would have come through.  He had plenty of chances to drive in runs tonight and didn't come through in a single one. 2 of his 5 individual LOB came with 2 outs.

The Yanks look to build on last night's win tonight when David Phelps and Scott Kazmir square off.  Yes, Kazmir is still around.
Posted by Unknown at 6:54 AM