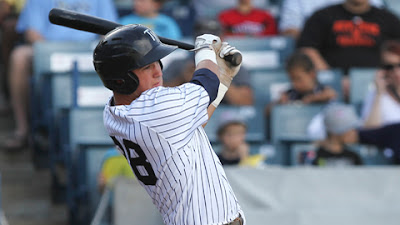 There was plenty of talent on display in Tampa this year, but pitching injuries, some poor offensive performances early, and wacky weather delays and rescheduling did them in.  Even with the losing record, there was a lot to be excited about here in August, starting with the bats.  Slade Heathcott continued to improve in his comeback, and finished the year with a .307/.378/.470 line in 243 PA that could very well earn him a bump up to Trenton to start next year.  Ramon Flores (.302/.370/.420) should be in the same boat after a season of continuous improvement, and both Gary Sanchez (.356 wOBA in 185 PA) and Tyler Austin (.401 in 148) made big strides in their adjustment to this level in the season's final month.  Austin even got an invite up to Double-A Trenton for their postseason.

Nik Turley continued to be the best pitcher on this staff, allowing 10 ER in 29.1 innings of work in August with 26 Ks, good for a final season line of 2.89/3.36 and 9.32 K/9 in 112.0 IP.  Shane Green, Matt Tracy, and Jose Ramirez all had solid months, and the rotation saw the full-time return of Zachary Nuding, so there's a lot to sort out here for next year's promotion candidates and returning starters.  In the bullpen, Branden Pinder had another strong month, allowing just 1 ER in 12 IP while striking out 12, before getting called up to Trenton for the playoffs, and Tommy Kahnle, after missing the start to the season, came up big with 1 ER and 10 total baserunners allowed in 12.1 IP in August with 19 K to finish with a 2.45 ERA and 2.71 FIP in 55.0 IP on the year for Tampa.

The pitching was picked up by the offense earlier in the year, but the guys on the hill started to take over late.  Brett Marshall (36 K in 34.1 IP) and Vidal Nuno (12 ER allowed in 34.2 IP) each had strong final months starting, as did Mikey O'Brien (12 ER in 34.2 IP over 6 starts).  And Mark Montgomery, despite pleas from many to be moved up to Triple-A or beyond, stayed here and dominated late in games.  Dellin Betances was a piece of crap before finally getting hurt and missing the rest of the year, but he never helped the team much anyway even after he was first sent down.

With Melky Mesa moving up to Triple-A, there was a gap in the lineup that needed to be filled, and Zoilo Almonte and David Adams did their best to fill it on their own.  Almonte hit 7 more homers and drove in 21 more runs in August, raising his final season line to .278/.322/.488 (.363 wOBA) with a new career-high 21 dingers.  Adams finished with an even better .306/.385/.450 line (.378 wOBA) after 13 XBH and 14 RBI in August, and got a look at third base.  Each of these guys have unknown futures, but bright ones as possible future Yankees thanks to strong years and spots on the 40-man roster.  Both J.R. Murphy (.319 wOBA in 170 PA) and Rob Segedin (.254 in 178) had trouble adjusting to the level and will certainly repeat to start 2013.  Shout out to Luke Murton and his team-leading 25 HR.  He's nowhere on the prospect radar, but had a solid year for a team that needed offense.

Pitching was the name of the game for these guys all season, whether it was in terms of what they were missing because of injuries, what young guys were struggling, or what older MLB retreads were carrying the load.  Ramon Ortiz was that man for most of the first 2/3 of the year, but he fell apart in August and it ended up being John Maine who stepped up.  After a terrible 9-run outing in the middle of the month, Maine pitched 19 innings in his final 3 starts down the stretch without allowing an earned run and striking out 14.  Adam Warren also had another strong month, allowing 15 ER in 35.2 IP over 6 starts, and posting a 29/9 K/BB ratio before getting moved up to the big show as part of September call-ups.  Give a call to Chase Whitley as well, as he gave up just 2 ER in 19.2 August innings, including a 4-inning spot start, and walked only 4.

Offensively it was the usual suspects from July leading the charge, Corban Joseph and Chris Dickerson.  CoJo hit 6 HR, scored 15 runs, and drove in 26 in August, and his final .377 wOBA in 381 Triple-A PA for the year has to have him in prime position to win a utility spot with the big club next Spring Training.  Dickerson scored 18 runs, drew 21 walks, and played solid D from the leadoff spot before getting the call and putting on a show in his Major League season debut yesterday.  Melky Mesa chipped in 9 HR and 21 RBI to make up for his lack of batting average in his first month of Triple-A ball, and could be a weapon in the playoffs, and Austin Romine is finally back to this level after a year of back rehab, and is hitting .220/.294/.407 in just 68 PA.
Posted by Unknown at 4:00 PM