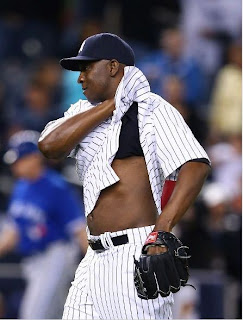 A Monday or 2 ago, I suggested the idea of Joe tinkering with his middle relief crew to see if he could find some more stable options.  With the deeper pool of guys he could help cover for the regression of some players, keep some of the harder-worked guys rested, and possibly overturn a viable option or 2 for postseason roster consideration.  Not only has that tinkering not really taken place, the regular middle relief crew has seen their workload cut back a bit in these last 2 weeks.  Joe has been leaning heavily on his core group of high-leverage relief pitchers lately, and now there might be cause for concern.

Since Monday the 10th, the Yankees have played 9 games.  Here's the workload the core group of relievers (Rafael Soriano, David Robertson, Boone Logan, Joba Chamberlain) has had in those 9 games:

That does include 2 scheduled off days and the extra day of rest on Tuesday from the rainout, but that's still a lot of appearances and a lot of innings to rack up on that number of guys in such a short period of time.  And that's not even counting the warmup pitches, or the times guys have gotten up to warm up and then not entered the game.  There's been at least 2 of these 4 working in damn near every game the Yankees have played since the 10th.

In fairness, this high usage rate has been necessitated by the Yankees playing nothing but close games in that span.  They haven't played a game with a run differential higher than 3, on the winning or losing side, since the Sunday blowout of the Orioles, and with them not putting any distance between themselves and Baltimore despite this strong stretch of play, you can't fault Joe for going to his best guys to preserve wins.  I know I'd be squawking if they would have lost one of those close games because Cory Wade or Cody Eppley was in there pitching instead of Soriano.

That being said, the question of what these guys will have left in the tank at the end of the season/beginning of the playoffs is becoming more pressing.  Logan is already looking at a career-high number of appearances, Soriano has already set his second highest appearances and IP totals, and D-Rob has hit a bit of a snag in September, although that could have something to do with his sudden obsession with the cutter.  I'm not too concerned about running Soriano into the ground, what with the rumors swirling about him opting out after this season, but it would still provide a much greater level of comfort to know that these 4 aren't going to head into the final week of the season completely gassed.

Credit to these guys for continuing to go out and get the job done on a regular basis, and credit to Joe for recognizing the importance of each game and managing to win by consistently going to these guys with the game on the line.  Sooner or later, though, it would be nice if the offense could provide enough run support or if the starters could hold a big lead so that this group, particularly Soriano and D-Rob, could get a few more days of rest.
Posted by Unknown at 10:53 AM