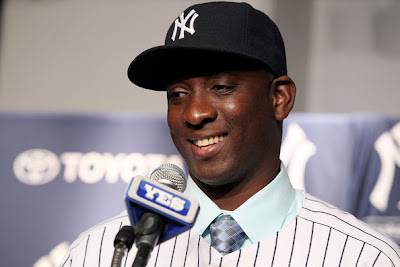 And from the Yankees' standpoint they really wouldn't be dead in the water without Soriano.  They'll likely get Mo back next season, they'll still have D-Rob, Joba, Boone Logan, and Aardsma out there, and they could use part of that extra $14 mil to fill any leftover bullpen holes.  If Soriano wants to test the FA waters, let him.  Make him a qualifying offer and when the Dodgers throw 3 years/$48 mil at him, take the extra draft pick and walk away.
Posted by Unknown at 10:24 AM