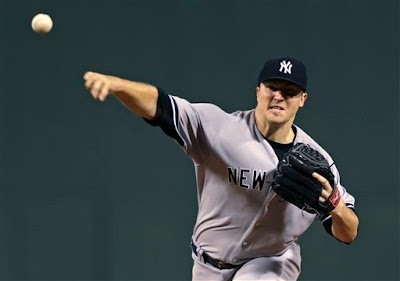 - Hughes: 7.1 IP, 5 H, 0 R, 1 BB, 7 K, W.  Great night for Hughes and he did it without really trying to be great.  He worked off the fastball a lot and he had a good one with late life last night.  That was enough to keep the Bahhston hitters at bay so Hughes didn't try to do too much with it.  Just throw strikes, mix in some offspeed stuff here and there, and good things can happen.

- Alex Rodriguez: 2-5, 1 R, 1 SB, 1 K, 3 LOB.  Helped create the first Yankee run with his stolen base in the 4th.  That's 12 on the year for A-Rod, a good sign that his legs have been feeling good and are still plenty healthy for this stretch run.

- Curtis Granderson: 0-4, 3 K, 5 LOB.  Helped contribute to another terrible 1-9 w/ RISP performance.  Guess those 2 homers the other night were just a mirage.

The Yanks will come back home tonight to start a 3-gamer against the Rays.  They've put a little more distance between themselves and Tampa the last 2 games, and they have a chance to deal a major blow to the Rays' division and playoff chances with a series win this weekend.  CC Sabathia and David Price kick it off tonight.
Posted by Unknown at 7:18 AM