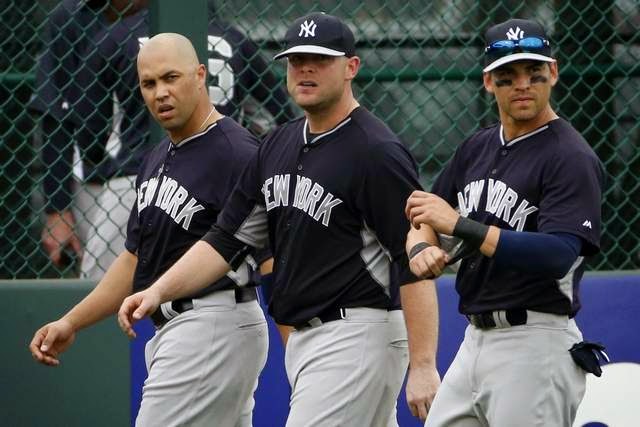 The first one to sign in late November, McCann was supposed to bring the traditional offensive punch back to the Yankee catching position.  Instead he's been spinning his tires at the plate since Opening Day.  McCann has battled problems every step of the way this season.  He's battled to adjust to the shift, battled to adjust to the new league and new hitting environment, and battled his swing mechanics and approach at the plate.  All that battling has left him with a .239/.294/.377 slash line in 330 plate appearances, production closer to his injury-bothered 2012 season than the lofty standards he's set for himself.  Defensively he's been fine, better than anticipated even thanks to an over 40% CS rate.  But he's been plain bad with the bat and the Yankees need a lot more from him in the final 68 games.

He was signed to lead off and play Gold Glove center field defense.  He's been doing the latter all season, even if the defensive metrics aren't fans of his work.  The former he's done in much smaller doses, barely a quarter of his 397 PA, and the unexpected shift in role and lineup spot has put a damper on his production.  There's nothing wrong with Ellsbury's .282/.346/.400 line, .330 wOBA, 44 runs scored, and 24 stolen bases.  It's just that I think everybody was hoping for a little bit more, something closer to his career slash averages, .350 wOBA, 55 R, and 30 SB.  Hitting primarily from the 3-spot has taken some getting used to for Ellsbury.  He's only recently started hitting for more power and a few nagging bumps and bruises have prevented him from settling into a groove.  The natural talent is there on display every night, but the misuse in role has made it a challenge for Ellsbury to translate it into consistent hitting success.

If you want to give the Yankees some credit for this move, you could say that at least they saw this coming. They passed on Beltran earlier in the offseason when he made it known that he was looking for a 3rd year.  After Robbie Cano went west, they changed their stance and gave Beltran what he was looking for.  He was supposed to be the balanced, smart, clutch hitter in run-producing spots that Cano had been.  He has not been that at all.  It all started when Beltran took a nasty fall over a railing chasing a foul ball in Tampa.  Since then he's never been the same player and has looked every bit a 37-year-old who's watching time catch up to him and pass him by.  He's not hitting for average (.216), he's not hitting for power (.401 SLG), he's no longer an on-base guy (.271 OBP, 7.1% BB rate), and he's only played in 61 games.  A pre-existing bone spur in his elbow has him limited to DH duty and he recently got knocked silly by a freak foul ball incident in batting practice.  That 3rd year is starting to look really scary already...

If McCann is a D, Ellsbury a B, and Beltran an F, Tanaka is undoubtedly an A.  If he weren't on the disabled list with a very disconcerting UCL tear in his right elbow, he'd be an A+.  The Yankees got everything they were hoping for and then some from Tanaka in his first 3+ months as a Major Leaguer.  He's proven himself to be one of the best pitchers on the planet from day 1 and well worth the big investment it took to get him.  His stuff has been terrific (9.39 K/9), his command has been pinpoint (1.32 BB/9), his feel for the game and how to work lineups has been excellent, and he's been the one constant source of length in the Yankee rotation (129.1 IP in 18 starts).  This elbow injury and what might be in store if the current rehab plan doesn't work out is frightening, but Tanaka is young enough to make it back from the worst-case scenario and be a force again.  He proved to everybody that his Japanese numbers were no fluke and he lived up to the hype.  Injured or healthy, he's established himself as a critical foundation piece to the Yankees' future.

I'd mention guys like Kelly Johnson, Brian Roberts, and Matt Thornton, but their collective contributions have hardly been enough to swing more than 1 game in or against the Yankees' favor.  They were only supposed to be complimentary pieces to these 4 larger pieces.  It is those larger pieces that the Yanks need more from in the second half, even if the prospect of that happening aren't great.
Posted by Unknown at 12:30 PM