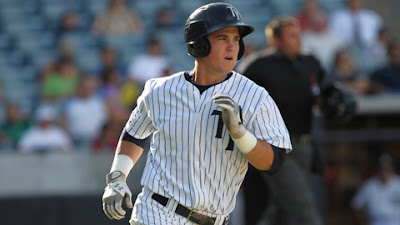 MiL baseball doesn't get even remotely close to the amount of national media coverage that MLB does, doesn't have nearly the fanbase size of MLB, and is basically one big group of young players ALL striving to break out.  Austin had to make a helluva good impression on fans across the country who may have only gotten to see him play once or twice to win this award, and it's a perfect way to cap off a monster season that saw him rise from sleeper in the Yankee system to national recognition.

For the season, Austin hit .322/.400/.559 in 472 total plate appearances scattered amongst Charleston, Tampa, and a couple of cameo appearances in the GCL and Double-A Trenton.  He hit 35 combined doubles, 6 combined triples, 17 home runs, and took 52 walks.  He scored 92 runs, drove in 80 runs, stole 23 bases in 25 attempts, and did all of that while transitioning full-time to the outfield and missing about 3 weeks with a concussion after getting plunked in the head in his first High-A game.  Yeah, I think I'd call that a pretty big break out for a 13th-round pick.

Austin is a consensus top 5 organizational prospect right now on his worst day, probably safely in the top 3.  He's going to crack some national top 50 and top 100 prospect lists heading into next season, and he's definitely worthy of all the recognition given what he's done since playing his first professional game.  Looking beyond that, Austin has positioned himself as the prospect most likely to make it to the show in time to help the Yankees achieve their 2014 payroll goal.  He got bumped up to Double-A at the end of this season, and seeing as how he posted a .390 wOBA in 150 High-A PA despite coming off a concussion, there's no reason to send him back there to start 2013.  There are still questions about his ability to stick in the outfield long-term, but Austin has proven himself to be a complete professional hitter so far.  If he continues to progress at the pace he's on, and comes close to reaching the .275, 20-25 HR potential that Kiley McDaniel referenced, that will be a tremendous boost for the Yankees in 2014.

So to review: 2012 SAL All-Star Game selection, 2012 MLB Futures Game selection, an offensive season that ended up somewhere in the .420-.430 wOBA range spred across 3 levels of the MiL system, and the 2012 MiLBY Award for Breakout Prospect of the Year.  I'd say it was a pretty good year for Tyler Austin and a pretty bad one for me in terms of evaluating his talent.  I'll make sure to remedy that later this offeason with the 2nd edition of the AB4AR Top 30.  I just hope Tyler can find it in his heart to forgive me.