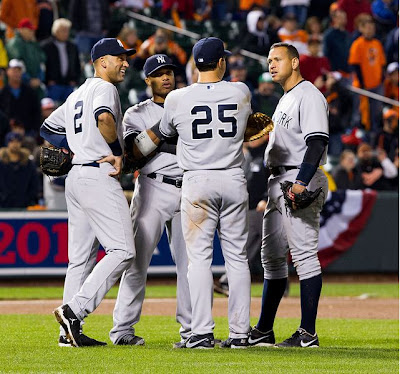 After an up-and-down 2011 season, 2012 was expected to be a bounce-back year for the Yankee infield.  Robinson Cano was at the top of his game, and there was hope that a healthy A-Rod and more balanced Teix would help re-establish the middle of the Yankee lineup as the most feared in baseball.  The Captain was supposed to be the wild card of the group, but as it turned out he ended up being the most pleasant surprise of the bunch.  All in all, it's hard to say 2012 was a successful one for this crew, but it's also difficult to call it a complete failure.

Even after down years in 2011, Alex Rodriguez and Mark Teixeira went into 2012 still being generally considered amongst the elite or close-to-elite members of their respective positional counterparts.  Both had made strides in the offseason to address their issues, both health and performance-related, and the early returns in Spring Training were encouraging.  With Robinson Cano being the no-doubt best second baseman in baseball and Derek Jeter finishing his 2011 season strong, this was still a group with a lot of hardware, a lot of recognition, and championship rings on their fingers.  They were the driving force of the team offensively and defensively, and if they were all clicking on all cylinders they were more than capable of carrying the team.

What We Learned- The Clock is Ticking on That Statement

The bounce backs just didn't happen for A-Rod or Teix.  In fact, they both experienced a continuation of their regression and officially started the countdown clocks for their eventual end as above-average everyday players.  Robinson Cano did as he was expected to do, and is still one of the top 5-10 players in all of baseball, and Derek Jeter's renaissance season was absolutely incredible to follow, but the age and injuries have really caught up to this group.  Jeter is almost certainly not going to repeat his 2012 season in 2013, especially not after recovering from ankle surgery, and there isn't much in A-Rod or Teix's numbers to make you think they are going to rebound to anything close to their hedays.  Collectively, this group is going to start being recognized more for their combined payroll commitment than their on-field production.

Payroll commitment was a big part of that fact, as Rodriguez and Teixeira were both still in the early-middle part of their big-money, big-year contracts.  Combine that with Cano's upcoming free agency and the likelihood of the Yanks making him a big offer as the premiere homegrown position player and Derek Jeter's unspoken lifetime contract, it looked very much like this infield nucleus was going to continue to be together for at least the next handful of seasons, regardless of how they produced.  The Yankees had put their eggs in this basket and it wasn't a basket that was going to be easy to pass on to anybody else.  And why would they want to pass any of the eggs on if they were all staying healthy and driving in runs?

A-Rod's continued struggles with injuries and regression made his albatross of a contract look even bigger than it already did, and the media firestorm that followed his latest underwhelming postseason raged to the point that Cash was answering questions about a possible trade to the Miami Marlins while the postseason was still going on!  The A-Rod trade winds are going to blow all offseason, as will the ones surrounding Cano's new contract now that he's made his demands known.  If the Yankees can avoid staying committed to either or both of those big deals as part of their 2014 payroll plan, either by pulling off a trade or passing on a new deal for Robbie, they'll do it.  And then this big-money band won't be together anymore.
Posted by Unknown at 1:00 PM