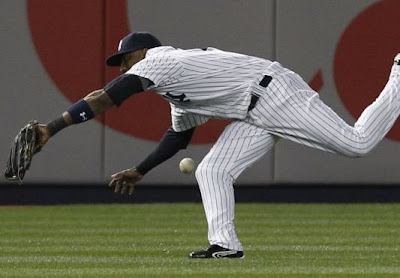 Eduardo Nunez is a strange case.  He reminds me of a joke that Patrice O'Neal told about Jeff Ross at one of the Comedy Central Roasts, where he called Ross a legend and then corrected himself by saying Ross was more like a myth because everybody had heard stories about how funny he is, "but nobody's ever really seen it."  That's Eduardo Nunez to me; he's been talked about as the next big homegrown position player piece for the future for what seems like the last 3-4 years, and he always ends up not being that.  I bring this up today because Cash and Joe each mentioned Nunez in their recent year-end addresses, but not in a way that makes his current or future standing within the organization any more clear than it's ever been.  To me, it almost seems like the Yankees have no clue what to do with Nunez anymore, and if that's the case then it might be time to trade him.

During his big radio interview over the weekend, Cash had this to say about Nunez:

“I look at Nunez and his value as a shortstop.  I don’t look at Nunez being valuable in an everyday role other than shortstop, and we have a shortstop. In terms of everyday status for Nuney, I don’t see one as long as Derek Jeter is sitting there … All the calls of putting him in left field, I don’t understand.”

Not exactly a ringing endorsement for the kid, but still one in which the term "value" was used in a positive way.  Where the waters start to get muddied is when Joe chimed in on Nunez during his end-of-season presser yesterday:

“I think this kid has something to offer us.  There is talent there, there is speed, there is excitement, he has a lot to offer.”

This is much more on par with the type of rhetoric I've come to expect when members of the Yankee front office are talking about Nunez.  This is what we've been hearing about him for the last few years.  He's fast, he's exciting, he's got tools, he's got a lot of things to offer.

The problem is, he hasn't offered much of anything.  A lot of that has to do with the Derek Jeter roadblock in front of him at shortstop, but Nunez also hasn't done himself any favors with his play on the field, particularly on the defensive side.  He's gone from being the heir apparent to Jeter at short to being the team's main utility infielder to being someone who was experimented with as an all-around infield/outfield utility player back to being just a shortstop.  He's been a butcher in the field at every stop, and yet he's still got 2 of the most important decision makers in the organization talking about his future.  Only now they aren't talking about that future with any kind of clear cut plan for him.  They know he has things to offer, they know he's not going to be the starting shortstop, and they don't know how or where they're going to use him.

Here's what I know.  Eduardo Nunez is a .272/.318/.384 career Major League hitter in just short of 500 plate appearances.  He's got a little bit of pop (.112 ISO), good speed (38 SB), and next to no patience  (6.3% BB rate).  His defense is so inconsistent and his ability to turn the routine play into an adventure so constant that the team sent him down to Triple-A this season to work on his problems, and his negative defensive ratings combined with his .308 career wOBA and 88 career wRC+ make him a career -0.2 fWAR player.  The tools are there, but Nunez has yet to put them together into something resembling a consistently productive MLB player.  The Yankees are a big part of that problem, and Cash's comments show that they are at least somewhat aware of it, but they aren't offering anything up as a solution.

That being the case, why not start shopping Nunez around?  It's not like that would be breaking new ground for the Yankees.  He was rumored to be a target for the Braves last offseason, and his name has come up before in connection to other rumored Yankee trade targets.  He's still just 25 years old, and the tools he does have (speed, athleticism, contact skills) are still very attractive to teams looking for a shortstop.  Derek Jeter is going to be the shortstop for the Yankees as long as he wants to be, and a replacement level backup for him, like Jayson Nix, won't be difficult to find.  The Yankees have other needs on their roster, for 2013 and beyond, and some of the teams with whom they could be looking to trade this offseason (see: Diamondbacks, Arizona and Padres, San Diego) aren't exactly spilling over the brim with shortstop talent.

The Yankee decision makers have put in a great effort trying to convince us that Eduardo Nunez is the next big thing for the last few years, but the divergent messages being passed along in Cash and Joe's recent comments are signaling that even they are starting to run out of ideas for how to use him.  Jeter's presence and the Yankees' "win now" philosophy have, are, and will continue to stand in Nunez's way of becoming the everyday shortstop in New York, but the tools and the talent that are always mentioned in connection with Nunez still make him valuable to the team as a trade piece.  To me, it makes the most sense to try to turn that into something that can help the team next year while other teams still value those tools.
Posted by Unknown at 8:30 AM