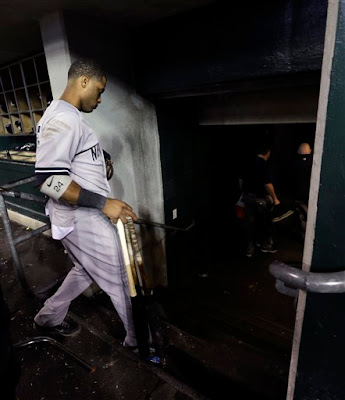 Cano turned 30 years old today, still squarely in the middle of his prime but much closer to the magical age of decline that eventually strikes every baseball player than he was a few seasons ago.  A 10-year deal would have Cano active and presumably playing second base through age 40, something that few have done and even fewer, including some of the best second basemen of all time, have done successfully.  To illustrate that point, here's how Cano's career numbers stack up against some of the greatest second basemen of all time and some recent offensive comparisons at his position, and how those guys' production fell off at age 35 and in their age 40 season or final season, whichever came first:

That's a lot of talent there, and also a lot of regression.  There are a few outliers, like Kent and Biggio having seasons at age 35 that beat their career production averages and Kent's still solid age 40 season, but for the most part the trend holds true that the mid-30s are when these guys started to slow down.  Some of the best and closest offensive comparisons to Cano, like Alomar and Chase Utley, didn't or don't look like they're even going to make it age 40 as an active player.  And almost all of the comp players in this selection had better career BB rates than Cano.  Their pitch recognition and count working skills to take walks helped slow down their decline in production and still made them valuable.  A free-swinger like Cano is more than likely not going to learn plate discipline at his age, and won't have those walks to fall back on when his bat speed inevitably starts to decline in his mid-30s.

Utley is of particular concern, as the only player still active on this list and someone who has a very similar career stat line and amount of service time as Cano and who already looks to be well on his way to settling into permanent decline at age 33.  That's not to say that Cano will fall victim to that, as he hasn't had nearly the health problems that Utley has, but it is something that teams will take into account, Yankees included, when making their eventual offers.

This next contact is, in all likelihood, going to be the final one that Robbie signs as a professional baseball player, and he has every right to go out and get the best deal he can for himself.  He's set himself apart from the pack as the premiere second baseman in the game today in the last 2-3 years, and the type of numbers he's capable of putting up in the next few seasons are certainly worth top-tier money.  Good on him for wanting it, and good on Scott Boras for doing his job and going out and getting it for him.  But if they honestly believe that somebody is going to hand them a 10-year deal for $20-22 mil a season, they need to set the bar a little lower.

The Yankees, and the rest of baseball through association, are learning the lesson the hard way about what happens when you hand big-year, high-dollar contracts to players in their 30s, and nobody out there is going to want to be the next to make that mistake.  Some of the best second basemen to ever play the game saw their production drop off in a big way as they've moved into the twilight of their careers, and there's no reason to expect Cano to be any different.  6-8 years at top-dollar would be reasonable and do-able for Cano, and that's something the Yankees can and should get involved in.  But any more than that, and they'd be wise to pass on Robbie and Scottie's demands.

All stats courtesy of FanGraphs
Posted by Unknown at 2:00 PM