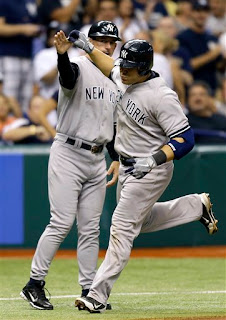 Russell Martin's down year has been just one of the contributing factors to the Yankees' decreased offense output, and one of the most puzzling.  Mike Eder of TYA touched on this topic on Thursday, the topic of Martin's incredibly unlucky season-long BABIP luck.  It's hovered around the .200 level all season, resulting in Russ spending most of his time below the dreaded Mendoza Line.  It's only been a week, but there are already signs that Martin's BABIP luck is finally starting to turn.

Checking his contact rates so far, there's little reason to expect Martin to have the success he's had.  His LD rate is just 5.6%, the only month this season that Martin's LD rate has been below 15.4%.  It's a very small sample size, but the spike in Martin's FB rate (61.1%) clearly shows that the couple of HR have been the driving force behind his slight surge in September.  Other than that, there hasn't been a lot of contact that should be generating a .300 batting line, so it must be the BABIP gods finally throwing some good vibes his way.

As Mike said, Martin's 2012 total stats can't and won't be saved by one good month.  But if his luck is turning in September, that's good for him and for the team.  Right now his BABIP for September is still just .250, but that's high compared to his other monthly splits and can only go up as more hits start to drop in.
Posted by Unknown at 10:59 AM