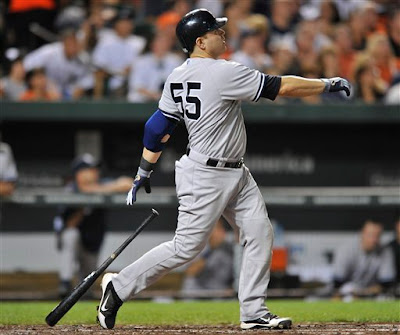 - Hughes: 6 IP, 5 H, 3 R ( 2 ER), 0 BB, 5 K, W.  As I mentioned in the last recap, Hughes needed this win in the worst way, and the Yankees needed it in the worst way.  And Hughes delivered.  The HR was bad, but outside of that Hughes was really in control of the Baltimore lineup.  He had his offspeed stuff working, his fastball command was much better, and Joe let him end on a high note after 6.

- Swish: 0-4, 1 R, 1 K, 3 LOB.  The sell on the HBP was nice, but Swish was pretty useless outside of that.  His error contributed to Baltimore's one big inning against Hughes.

Each team's got a game in hand in the series, so today's matchup could be the big swing game.  The Bombers will once again send their ace CC Sabathia to the mound in a game they really need today, and it'd be nice if he could have one of those big shutdown performances.  Baltimore's throwing the uber-hittable Joe Saunders, so the awakening offense should get plenty of chances to do damage.
Posted by Unknown at 8:15 AM