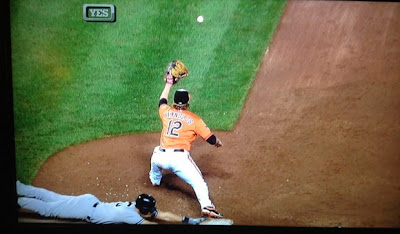 - Sabathia: 6.1 IP, 8 H, 5 ER, 0 BB, 5 K, L.  A start like this isn't going to quiet the "not an ace" arguments coming for more and more people.  3 HR allowed is never good from CC, especially when one of them is Lew Ford.  CC just isn't missing bats, isn't locating down in the zone, and isn't throwing his fastball with any kind of significant life.  You have to think there are still problems with that elbow, and with the way the rest of the rotation is pitching right now this is a major issue for the Yankees if this is all they're going to get from CC.

- Swish: 0-5, 1 RBI, 4 LOB.  It drove in a run, but Swish groundball with the bases loaded in the 9th was a crushing play to end another horrible night at the plate.  It's hard to believe with how hot he had been, but Swish doesn't have a single hit on this current road trip.

Series finale today and the best the Yankees can hope for is a split, which would at least allow them to leave Baltimore as the only team in first place of the division.  They go from their supposed ace to their no-doubt 5th starter today in Freddy Garcia to face off against Zach Britton, and I certainly hope Joe and Mike Harkey have Adam Warren ready at a moment's notice.
Posted by Unknown at 7:39 AM