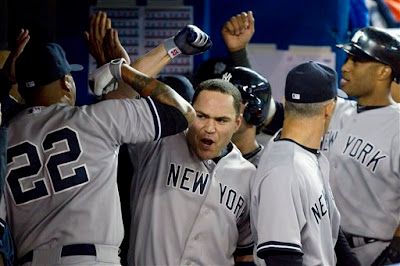 - Swish: 2-4, 1 2B, 2 R, 2 RBI, 1 BB, 1 K, LOB.  Swish has been consistently good at the plate for close to 2 weeks now, which could be huge for the Yankees.  They are going to need another productive bat in the middle of the lineup if Teix doesn't make it all the way back.

- Derek Jeter: 1-6, 1 K, LOB.  Only 18 pitches seen in 6 PA for The Captain last night.  That's partially his MO, but you'd like to see a little more count working to create some on-base opportunities from the leadoff spot, especially with a hot Cano and Swish hitting behind him.

It's 1-1 now, with 2 games to go.  Baltimore refuses to cooperate and lose when the Yankees win, but the magic number for the postseason and the division continues to shrink and can shrink some more today with another victory.  A good lefty (Andy Pettitte) and a crappy one (Ricky Romero) square off this afternoon.
Posted by Unknown at 5:27 AM