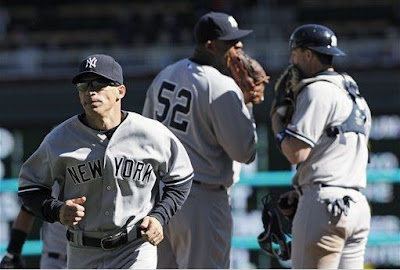 - Stat of the game- Joe Mauer saw 10 pitches against Sabathia.  He struck out on the first 9 and then grounded out on the 10th.  That's pure ownership.

- Sabathia: 8 IP, 6 H, 2 ER, 1 BB, 10 K, W.  Second straight "vintage CC" performance from the big guy, who seems to have found his game.  The fastball is very lively and he located it to both sides of the plate to get ahead in the count, and his slider was an absolute swing-and-miss thing of beauty.  Lots of GBs and outs on the infield, and all 6 hits he allowed were singles.  That's the ace people have been looking for.

From one road trip to the next, and the last.  The Yanks start a 4-gamer in Toronto tonight.  Ivan Nova, possibly pitching for a postseason rotation spot, gets the ball against Toronto's Brandon Morrow.
Posted by Unknown at 7:21 AM