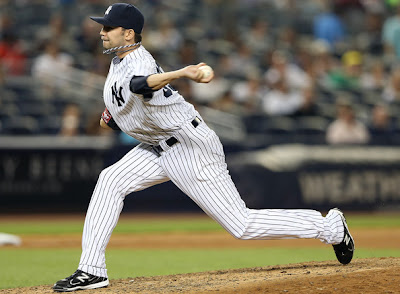 Enough time has passed for me to get over Loone Bogan's 7th-inning bed shitting incident the other night.  In the end, it didn't cost the Yankees any ground in the division race and they still left the Twin Cities with a series victory.  What is still a serious problem is Logan's workload and the negative impact it now seems to be taking on his effectiveness.  Logan is the no-doubt #1 lefty in Joe's trusty bullpen binder, but he's been used so much that I almost have to question bringing Logan into big lefty-on-lefty situations with how out of gas he appears to be.  While Logan has been run into the ground over the course of the season, Clay Rapada has quietly continued to go about his business, and go about it quite well, as the designated #2 LOOGY.  In an attempt to get Logan some much needed rest, and to not risk blowing leads in tight games in the season's final week, it might be time to go to Rapada.

There was some backlash when I praised Rapada for his fine work earlier in the year, and the general expectation around the blogopshere and fanbase, whether it's openly admitted or not, was that Rapada would crash back down to earth at some point and probably end up being DFA'd.  Well that just hasn't happened.  Rapada has stayed consistently effective all season, sporting a 2.87/3.27/3.70 slash line and a .186/.268/.280 batting line against vs. lefties in 37.2 total IP.  And as the burden on the bullpen has grown heavier over the past 2 months, and Logan made more appearances out there than the grounds crew, Rapada has turned in his best performances.

Since the start of August, Rapada has pitched 9.2 innings, not a large sample size for a pitcher but large enough to feel confident in the results when you're talking about a guy who typically only comes in to face a batter or 2 at a time.  In those 9.2 innings, Rapada has allowed just 3 ER while striking out 12 and walking just 2.  Walks were a big issue for Rapada earlier in the season, but he appears to have overcome those control problems, posting his lowest BB/9 rates of any month in August and September and doing it without sacrificing his strikeout totals.  All in all, Rapada's combined August-September ERA/FIP slash of 2.79/1.34 with more than a strikeout per inning paints a picture of a guy who can and probably should be getting more high-leverage consideration.

While we're on the topic of leverage, Rapada's leverage splits on FanGraphs already show a trend of better performance in bigger moments, albeit with less than a third of his total IP coming in medium-or-higher leverage situations.  By comparison, Logan hasn't exactly been shutdown in his higher-leverage work, some of that production probably being attributable to his high usage rate.  Just one more reason for Joe to consider going to Rapada more when he needs a big lefty-on-lefty out.  Rapada's sinker-slider combo has been just as effective as Logan's fastball-slider, and it comes with the added difficulty of his funky arm angle and release point.

He hasn't had a ton of big opportunities this season, so admittedly there is some risk in putting Rapada into bigger late-game situations, but that's through no fault of his own.  Rapada has done the job he's been asked to do time and time again this year, and the fact of the matter is he's pitching better than Logan right now.  With the number of strong righties they have in the bullpen, and a couple guys capable of pitching multiple innings, the Yankees can afford to entertain the idea of taking Rapada as a second LOOGY in the playoff 'pen, assuming they make the postseason.  If it were up to me, Rapada would be my 7th and last bullpen selection, and if for no other reason than to get Logan the rest he desperately needs, it might be worth Joe's time to give Rapada some late-game auditions in this final week.

P.S.- This isn't the first time I've suggested this.
Posted by Unknown at 1:00 PM