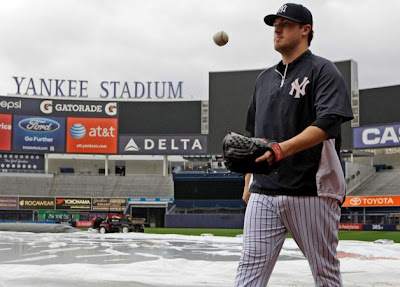 - Phelps looked worthy of another start after his last outing in Bahhston, so maybe this is the baseball gods' way of evening things out for him with the rainout and getting him that one last start.

- That being said, I was a little surprised to see Hughes and CC get bumped back.  This is Hughes' day to pitch, and he's much more likely to go deeper into the game than Phelps, something the Yanks might need tonight with Pettitte's short pitch count.

- I understand the need to add an arm to the rotation for a turn, but I would have rather gone for the kill today with a Pettitte/Phelps handcuff combo, Hughes at night, and then try to fit Phelps back in at the end of this turn.  Strange to plan for the future when Baltimore is still nipping at your heels in the present.

- Maybe Joe just wanted to push CC back to set him up for the Oakland series, which should be the most challenging one from here on out.  Or maybe he wanted to give CC another day of rest, what with CC being hurt and all...

- We've got a good chance to see Freddy Garcia today as the caddy to both Pettitte and Phelps.  Adam Warren still isn't doing anything except taking up locker room space, so if Joe ends up going to him that's probably a bad sign.

- The secondary bullpen crew should also be on high alert.  Extra day of rest aside, the high-leverage bullpen group has had a lot of work recently and there's no way Joe will use D-Rob or Soriano twice in 1 day.  Whichever game ends up with a wider scoring margin, that will be the game for the Eppleys, Wades, Rapadas, and Lowes of the world.

- Speaking of scoring margin, it'd be nice if the offense came out and jumped on Ricky Romero this afternoon.  He absolutely sucks and shouldn't have pitched as well as he did last time against them, and they've tuned him up plenty of times before.

- No word on if Toronto will pitch Henderson Alvarez in the second game but if so, same rules apply to him.  Garbage pitcher, been eaten up by the Yankee lineup before, should be again.

- Gonna be a busy day for Nick Swisher.  With the Yanks potentially facing a righty and a lefty, I imagine he'll get one start in right, the other at first, and could end up at both positions in both games once Joe starts dipping into his bag of platoon bats in the late innings.

- Regardless of how good his ankle feels, I can't see Jeter playing both games today.  If he feels good enough to play short, fine.  He plays it in the day game and then sits for the night to see how the ankle responds to 9 innings in the field.

- This type of situations must just eat Francisco Cervelli up inside.  He's a better player than Chris Stewart, and would be guaranteed at-bats today if the Yankees weren't so enamored with Stewart's defense (which isn't even that good).

- Andruw Jones will get the outfield start against Romero, but he shouldn't.  I'd give that left field spot to Jayson Nix and let Eduardo Nunez be the right-handed DH.

- Nunez will be another pulling double duty.  He's been a boost to the offense, so he should be in the lineup against Romero, and if Joe sits Jeter for one game Nunez becomes the starting shortstop.

- Hopefully that extra day off didn't take any of the heat out of Curtis Granderson's bat.  Even some of the outs he's making lately have been loud.  His timing and pitch recognition looks much better and he's squaring up on a lot of fastballs.  If he can stay patient and not chase the junk down and away, he can draw at least 3 walks today.

- In case you couldn't tell, I don't like this Brett Gardner business one bit.  Stop messing with the guy and let him heal.

- Based on nothing more than a good feeling right now, I like the Yankees to take both games today.  The O's played a marathon last night and will be dragging tonight.  A chance to make up 1.5 games is there for the taking, and I think the Yanks take it.
Posted by Unknown at 8:00 AM