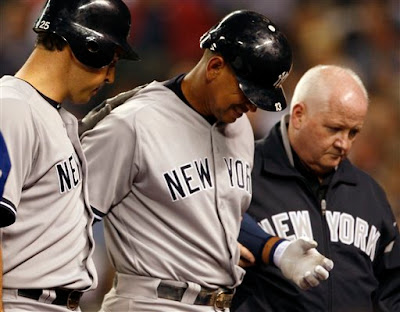 
Ramiro Pena- He wouldn't be at the top of my list to replace A-Rod, but the Yankees have already called him up to take Rodriguez's roster spot and he will likely form a R/L platoon with Eric Chavez for the time being.  We all know what Pena is at this point, an all-field/no-hit utility infielder, and that's exactly what he's been in 314 PA at Triple-A this season (.253/.305/.319, .283 wOBA).  He'll bring little to the table offensively, but he shouldn't take much off of it with the glove.

Chavez- If the Yankees decide to go L/R platoon, a move that would make the most sense with the roster they have right now, Chavez is going to be looking at more time at the hot corner.  He's stayed relatively healthy and productive this season, but it's always a slippery slope when you're talking multiple games in the field.  I have very little faith that Chavez's body can hold up to the daily grind of playing 3, 4, 5 games a week in the field, and Joe would be wise to use him sparingly in the field to maximize his value.

Jayson Nix- Nix has been an underrated bench piece for the Yankees in the last few months.  He's played multiple positions in the field, come up with some big hits at the bottom of the order, and given Joe the ability to give multiple guys regular rest.  He wouldn't be the best third baseman in the world, but he can hold his own against LHP (.323 wOBA in 53 PA) and could be a better all-around option for a L/R platoon.

Brandon Laird- Laird lost a lot of his prospect shine with a down year in Triple-A last year, but did get a few ABs after September roster expansions to get his name out there.  It's been another rough season for Laird, who had a horrible start at the plate, but he's been hitting the ball much better lately and has raised his season line to .248/.308/.405 in the process.  He also thrives against lefties, hits for more power than Nix or Pena, and probably plays a better third base than them as well.  He's no longer considered a serious piece of the Yankees' future, but Laird could be useful as a plug-in in this situation.

Corban Joseph- I know I'm in the minority when I say this, but I think CoJo might be the most undervalued prospect in the Yankees' system.  When he's been healthy he's hit at every level, and that includes this season where he's posted matching .388 wOBA values at Double-A and Triple-A.  He's actually hit for MORE power since getting the call to SWB and has put himself on the map as a possible future bench piece.  He's a natural second baseman, and not a very good one at that.  But perhaps his defensive deficiencies could be masked by a move to the hot corner.

Eduardo Nunez- Probably the last name that anybody wanted to see on this list, but the fact of the matter is that Nunez has Major League experience and Major League experience at third, which could give him a leg up on the competition now that he's off the MiL DL and starting his rehab assignment in Tampa.  Like Pena, we know what kind of commodity Nunez is.  He can do some things with the bat, has great speed on the bases, and is an absolute butcher in the field.  If the Yankees don't find a permanent solution before the trade deadline, don't be surprised to see Nunez get the call when he's ready.
Posted by Unknown at 1:55 PM